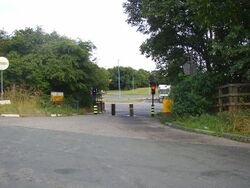 A secret exit at Hartshead Moor.

A rear access, better known as a 'secret exit', also known as a 'rear exit' or 'side exit', is a road which allows people to get from the service area to the local road network without using the main entrance (a motorway slip road).

They are provided to provide staff, highway vehicles, hotel guests and the emergency services access to the service area and the wider motorway network without having to make a lengthy detour up to the next junction.

In some areas, recruiting local staff for a low-paid service station job is difficult, and the time saved by not having to drive up to the next motorway junction (which also means you have the option of walking or cycling to work) can help kerb staffing difficulties.

Operators are required to prevent anybody else from using them.

Most service areas are fitted with either rising bollards, barriers or a number plate recording system, to prevent unauthorised traffic. In practice, most of those systems are either broken or not used. In some areas new security measures have been vandalised within weeks of being installed.

While police enforcement is rare, it does happen. A common trick is to park the police car out of sight at the end of the road, and stop everybody caught using the lane. Whether or not a fine can be issued depends on the quality of the signage at that particular location, but the presence of 'no entry' signs would normally be enough: you can only really argue the situation is confusing if you're a hotel guest.

In some areas, enforcement is virtually non-existent, and unauthorised vehicles can be seen using the rear access every couple of minutes. Many of these routes have been included on Google Street View and some unscrupulous estate agents have been known to use them to advertise a nearby property having good motorway access. 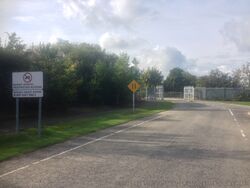 Heavy-duty fencing only works if it's closed.

There are several reasons general traffic is not allowed to use the rear access.

The first is quite simply that it's an operational requirement. Government policy states that people must not be able to join the motorway via a service station, so the operators must ensure that is the case. More recently a planning condition will also be imposed on service stations saying the same thing. Even if the unauthorised traffic is only trying to use the facilities, the policy is clear that the service area's priority should be to serve motorway traffic.

Secondly, especially in the case of the older services, the lanes these rear accesses connect to are not designed to handle much traffic at all. They were usually built at the same time as the motorway but with the minimal possible expenditure. They are narrow, weak, and may take traffic into residential or congested areas.

At the service station end, there is often an unconventional road layout. At some service areas, the rear access requires traffic to travel the wrong way down the one-way road, while others end with confusing or badly-aligned junctions. This isn't so bad when the only people using it are staff who have been trained on the issue, but becomes a problem when the general population are using it.

Finally, when people are taking a shortcut - especially when they don't want to get caught - they tend to speed up. The high speeds which unauthorised traffic has been seen reaching on these narrow lanes creates additional safety issues, especially if they are heading straight into the service area car park or a residential area.

Rear accesses were a standard feature of service area design from the very start.

As early as 1961, the Ministry of Transport were complaining about the gates at Newport Pagnell having been left open. They were shocked that three vehicles being seen abusing it in 10 minutes - particularly impressive when you consider how empty the motorway would have been at the time! The Ministry of Transport were frustrated by this because, as the landowner, they treated this as abuse of their land, and made numerous complaints to operators about it.

When Rownhams was planned in 1971, local residents were deeply concerned about the Rear Access being abused. This became a regular topic of correspondence as soon as it opened in 1976. In 1978 the Department of Transport eventually admitted that they had no suggestions as to how this could be addressed. The contract for Sandbach (opened 1975) was the first to explicitly state that the Rear Access must be controlled.

Despite staff not wanting to get out and lock it, a gate and padlock remained the only way of securing these exits until 1977, when Keele trialled a rising bollard system. Being close to the University, Keele was a popular shortcut for students. The rising gate was too expensive to roll out immediately, and frequently attracted vandalism.

With the creation of lodges, the Department for Transport reluctantly accepted the idea that lodge traffic can turn around using the rear access. They preferred this to traffic making lengthy detours. By 2008 this was stopped for all new lodges, and it is starting to be phased out nationwide.

With more families owning a car and fewer deliveries coming from the local area, rear accesses became less important, although they continued to be included for convenience. In 2008, a new rule was introduced stating that all new services must have the Rear Access permanently sealed off. This means emergency traffic can use the rear access to get to the service area, but not to join the motorway.

A new use (or problem) for Rear Accesses emerged in the 2020s: some service areas are now earning money on the side by selling food to local residents via food delivery apps. This means local couriers are looking for the fastest way in and out of the service area, and normally that will be via the Rear Access. 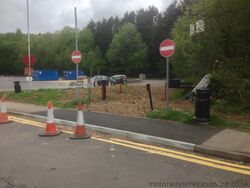 Here is a comprehensive list of all the services with a rear access and the road they join on to. Several unbuilt services have been included if it was clear there would have been a rear access.

UK services are listed first, with the five Irish examples at the end.