< return to Unbuilt Services Most other pages in this section break down the history of service station planning based on each road. Here is where we stop doing that.

The UK doesn't have that many major motorways, so it doesn't take long to cross them all off. After that you're left with a load of fiddly, shorter routes, and a few plans which didn't make it very far.

Ministry of Transport policy had always been that short motorways don't need service areas. This was the case for the M50, and the M2 only just slipped through the net. Their exact measurement varied, but they usually said a motorway had to be 30 miles long before they would consider one.

Now that service areas are planned by the private sector, there is no such rule, but the planning authorities will be looking for evidence of a need for a new service area and this is unlikely to be found on a short motorway.

First we look at what was planned for motorways which were never built.

The cancelled cousin of the M11 (see Roads.org.uk and Pathetic Motorways) would have had its own service area to mirror the M11's Chigwell.

The M12's service area would have been in the vicinity of Havering-atte-Bower, about ½ mile north of the village 15 miles from the centre of London. Notes about the proposal say that good landscaping would have been required to reduce the impact on the village.

The Havering-atte-Bower plan replaced a vague proposal for a service area at M25 J28, which assumed that the roundabout that's there today would have been maintained for the M12.

The 2012 proposal to expand London Oxford Airport included plans for a new motorway between the A34 and the M1.

Those plans included an interchange with the A4129 near Longwick, which had land zoned for a service area in its north-western corner.

This is rather surprising seeing as new service areas are normally an afterthought, but as the entire motorway was a private proposal, the developer could include any services they had in mind too.

The airport expansion plans are unlikely to ever get as far as requiring a new motorway, so the idea of it having a service area is almost fanciful.

In 2018, detailed plans for the new motorway between Kent and Essex were published.

This included an exit called Tilbury Junction, primarily provided to allow maintenance access to the tunnel. This also would have included provision for a service area, which was shown clearly in the visualisations. It is unusual for Highways England to suggest a new site for a service area, although they probably weren't expecting to get involved in any of the finer details of it.

In January 2020, a statement from Highways England said:

After further investigation and consideration of the feedback from statutory consultation, we have decided not to progress with the rest and service area.

In the 1970s, a new motorway was planed to cut the corner between the M5 and The Midlands (see Pathetic Motorways).

Traffic would have been directed away from the M5 just before Strensham, so the road needed its own service area. Three possible sites for service stations were considered around Defford and Pershore, at the bottom end of the road.

No service areas were planned at the northern end of the road, but as neither the M69 nor the relevant section of the M42 have any services, some would have been needed.

The planned relief road for the West Midlands (see Pathetic Motorways) would have had a service area near its southern end. An opening date of 1995 was given.

Prior to that proposal being confirmed, "several sites" were analysed, generally on its central section, including Holly Bush and High Lodge/Stourton. It was noted that these were in scenic areas. 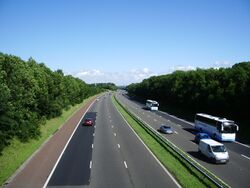 The site where Kirkham services was planned.

Since 1992 in England, developers have been solely responsible for coming up with their own proposals for new motorway services. This led to an increase in proposals, but they are normally clustered around the same area and most are quickly ruled out.

New motorway services once planned for the motorways which haven't been covered elsewhere are listed here.

Significant unfulfilled plans for A-road service areas have been included too, but not every once-planned A-road restaurant is here. Service areas which were eventually built are not included in this table.