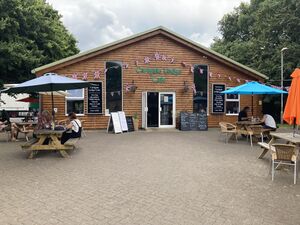 A303 at Cartgate Roundabout
(also accessible to traffic on the A3088)

Technically this is only a picnic area, but it is officially endorsed in the sense that it's designed and run directly by England's National Highway Authority. It used to offer just parking for a number of vehicles with a wooded picnic area in the centre, where tourist information and a daytime-only toilet block could be found.

The picnic area shouldn't be confused with the official service area at Cartgate Garage, barely a mile to the west.

Short stay free parking is available for all vehicles. 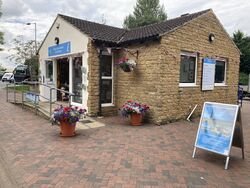 When the A3088 was built in the 1980s, a roundabout was built at Cartgate which included an additional exit for some-sort of facility. Eventually the Highways Agency built this picnic area there, which makes up for the lack of parking spaces at existing service areas along the A303. It opened around the time that the A303 was upgraded to a dual carriageway in the 1990s.

The Highways Agency (now called National Highways) tended to avoid building places like this because it has little in common with their biggest responsibility that is maintaining motorways. A tourist information centre was added to the site in 2002, operated by South Somerset Council.

Catering facilities were originally provided in a portable building but this was replaced in 2011 with a log cabin, which gave what was then called Highways England a reliable on-the-ground contact. These catering facilities are now the only parts of the land that National Highways don't own.

There have been several plans to turn the site into a full service area, including a proposal from Margram in 1989 which included a restaurant and hotel in this area, but the address points to a lane to the north. By 2003 this proposal had become one for a BP Truckstop, which would have been positioned next to the picnic area and accessed from it.