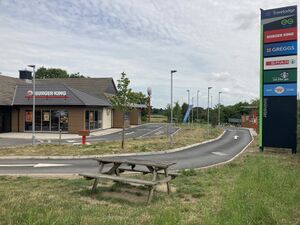 A303 Southfields Roundabout, Ilminster
(also accessible to traffic on the A358)

The last official service area on the route to the West Country, positioned before the Blackdown Hills. 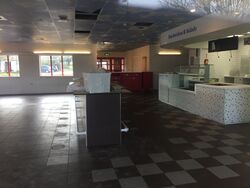 The A303 has several signposted 'local facilities', including some signed from the opposite side of the roundabout.

The service area is positioned on the A358, but not the major road that leads to Taunton - that is a fourth (of five) exit from this roundabout. The roundabout is called 'Southfields' (and nicknamed 'Horton Cross'), but 'Ilminster' is the name promoted by the facilities.

That road to Taunton is planned to be upgraded in 2025. This won't directly affect Ilminster services, though it may increase the amount of passing traffic. If the Southfields Roundabout is ever upgraded, then the service area will see a drop in passing trade.

The site is one of few A-road services to have motorway-style 'Tiredness Can Kill' signs on each approach to it, suggesting there is a history of fatigue-related problems here.

The service area opened in 1989 with a Shell filling station, Happy Eater restaurant and Travelodge hotel. The restaurant is positioned in the corner right next to the roundabout, while the forecourt is higher up, closer to the entrance.

The restaurant became the Ilminster branch of Little ChefHistory in 1996, opening along with a Burger King franchise. Although it was never formally designated a 'blue' Little Chef, where it would have been marketed towards evening diners, there was some evidence of blue branding, pointing towards either a mistake or a rethink.

The restaurant later became a Little Chef Choices site in 2002, which saw it gain a Harry Ramsden's and Caffè Ritazza. These were removed and Coffee Tempo! joined instead. Another thorough refurbishment of the site was given in 2012, where the site gained a Good to Go counter.

As one of the more profitable sites, the restaurant lasted until January 2018 when the new owners' rights to the name expired. The signs were taken down and the restaurant continued as EG Diner. Keeping it this long was unlikely to be a deliberate decision, but the result of problems converting it to a Starbucks.

The EG Diner closed on 31 October 2018, and it was thought that the Burger King would close too, to be converted into a KFC Drive Thru. This didn't happen and the Burger King remained as the only trading unit in the building, with the former restaurant area being closed off and laying empty.

The planned redevelopment was eventually scrapped in September 2019, due to planning issues. A new round of refurbishment was scheduled for October 2019 but this was again delayed, with Burger King eventually closing on 22 December 2019.

The site partially reopened on 26 May 2020 with only a new Burger King Drive Thru, with the other units held back due to COVID-19 travel restrictions. A Sainsbury's On the Go store later opened on 4 July 2020, with a Greggs store later following at the end of July 2020.

The Sainsbury's On the Go store was rebranded to SPAR in 2021. The SPAR store closed permanently on 28 October 2021, citing low trade.

Since 2004, there have been numerous efforts to develop the land on the opposite side of the roundabout to Ilminster services. This has previously included large developments with houses, restaurants and petrol stations, known as Hort Bridge.

That plan is currently on hold, but land immediately adjacent to the roundabout has been turned into Southfields Enterprise Park. In 2020, a Costa Drive Thru opened, which will rival the facilities in the main services (and arguably be easier to access for westbound traffic).