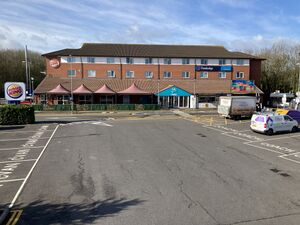 The strange place that is Bridgwater: officially a motorway service area, but packed into Huntworth Business Park, with a tiny multi-storey car park and no grass to be found.

First 2 hours free for all vehicles, after which cars must pay £15 and HGVs, caravans and motorhomes £27. HGVs can pay £30 to include a £10 food voucher.

Prices are paid using PayByPhone. The location code is 2429. 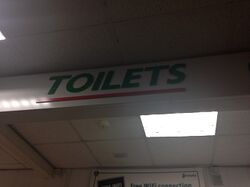 The former First red and green branding, still on display until 2018.

In terms of footprint this is the smallest full service area on the motorway network. The multi-storey car park, retaining walls and in-built motel manage to save on a lot of space, although as a result it does feel cramped.

This was the only service area First built: it was designed by Boulevard Land Ltd and taken on by First as an investment. It opened in around 1999, and was later sold to Moto.

In 2021, Which? Magazine ranked Bridgwater last of the 68 service areas it visited, strongly criticising its cleanliness and facilities. They gave it a total score of 32%, well below any of the others. Moto said they were "appalled" by the discovery, while Sedgemoor Apple reported that Bridgwater's Ian Liddell-Grainger MP has called on the service area to be closed.

Unlike all other Moto service areas, until about 2005 Bridgwater had an unbranded restaurant. The toilet signs inside the service area were also still in previous operator First's green and red branding until 2018.

When the M5 was built, the area around North Petherton and Adsborough was searched for a suitable reserve site, which never needed to be used.

Around the time that the current service area was planned, another site in the south-west corner of J24 was planned by Welcome Break, and taken over by Granada. It would have had an entrance on the link road which looped round to the J24 roundabout. This was rejected at a public inquiry.

Meanwhile another site was proposed by Hallam Land Management on the east side of J24, accessed from Huntworth Lane. A fourth site was planned by Somerset County Council on the M5 at East Bower, a few miles north of here. Somerset County Council's plan may have sounded the most sensible, but the Highways Agency said it was too close to Sedgemoor and refused to connect it to the motorway.

One councillor later explained that the decision to build the service area where it is - which is the furthest from the M5 of all the options proposed - was due to people "kicking up a stink". 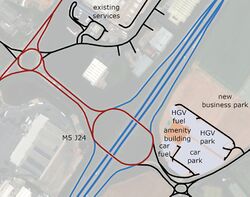 In May 2017, S Notaro Land Ltd revealed they would be seeking permission to develop land on the eastern side of M5 J24 to include a service area, petrol station, hotel, homes and offices, in a development called Junction 24 East.

The developer had suggested that they expected the new 'Junction 24 East services' to be fully signposted alongside the existing 'Bridgwater services'. Highways England had said that the proposal, as originally submitted, wouldn't qualify for signage (most likely due to issues with the abnormal load bay), but even if no signage is provided, this new service area is going to be more visible and easier to find, risking confusion.

The developer had suggested that they would be expecting official service area road signs to be provided; Highways England said that the proposal, as originally submitted, wouldn't qualify for signage, but even if that turned out to be a showstopper, the new site would be easier to find, risking confusion.

The new building, which is expected to be run by EG Group, has been called Notaro Park after the developer's founder. Notaro Land justified their plans by arguing there are "concerns" with the existing service area, what with it being too small and difficult to access.

Having ruled out building a direct exit from the M5 southbound, the new service area will be accessed from a link road and a roundabout to the east of M5 J24. The three-storey building has been deliberately designed to be visible from both sides of the motorway. The top floor will be a landscaped roof terrace, while the mezzanine-style middle storey will be a business lounge.

It will be a glass amenity building with terracotta façade cladding at each end. Petrol stations will be positioned to the north and the south of the building. Parking will be provided for 341 cars, 39 HGVs, 10 caravans and 8 coaches. Residents have been vociferous in their objection to the proposal, as they often are, describing it as "monstrous".

The new building will be operated by EG Group, and is designed to be the centrepiece of the new business park and attract local traffic. The developer claims it will also promote Bridgwater as a town, and be "unlike any other service station". At least 24 letters of objection were received, mostly suggesting existing service areas away from J24 be expanded instead.

Highways England have not commented on how, or even if, the 'two service stations at one junction' issue will be tackled. This problem has never arisen before, as until recently service stations were forbidden from being built too close to each other.

After several delays, the project was formally approved on 18 August 2020. A reserved matters application is to follow in the coming months, although the decision could be contested.

While some councillors were against the plan, many accepted there was an issue with the existing service area, in terms of both traffic and its reputation. Some felt that this is an opportunity to reduce that burden.