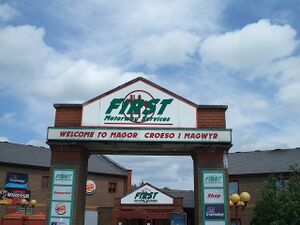 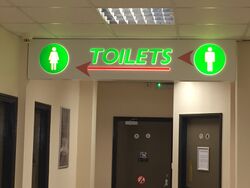 First's green-and-red colours live on in some places.

For the first service station to open, see Original Five.

First was a small player in the field of motorway services who certainly struggled with image, but from the inside may have had the right ideas. All of their sites were eventually acquired and refurbished.

It's easy to remember First for its reputation, but as a project it was probably a successful investment for a few members of staff, and perhaps that's what it should be remembered as.

The logo used the words "First motorway services" (or "services & lodge"), over the top of a plate and cutlery.

In 1995 Granada wanted to take over Pavilion, but were told this would give them too much of a monopoly. A management buyout from three of their own senior staff saw Magor and Rivington pass to a new operator, First Motorway Services, on 30 April 1996. The choice of sites may have been tactical on Granada's part.

The new operator said it wanted to expand to a network of at least seven sites, and to take on the bigger operators by competing on service.

First built Bridgwater and later sold it to Moto, who ironically are Granada with a new badge. The price was not disclosed but may be a clue to First's strategy as a firm. In April 2006 they bought out their original backers, who had been looking to sell, and arranged a £7.7m refinancing package, with which they acquired Symonds Yat and claimed a further six similar acquisitions could be on the way.

Meanwhile, Magor and Bolton West were receiving considerable criticism for their service in the press. They were perhaps dealt a raw deal with Bolton West: it had two very large buildings and very low custom levels, which was reflected in how all its previous owners had treated it. Considerable maintenance was required and rarely carried out.

Despite being online since 2003, First's website only ever acknowledged the existence of Magor. There may be a more innocent explanation, but it came across as if they couldn't even find the words to describe Bolton West. A sign at Magor encouraged customers to visit Bolton West, but didn't mention that they also owned nearby Symonds Yat, a place which is often forgotten - mostly because very few complaints were received about it.

In 2010 Moto were granted permission to take over Magor and Bolton West, handing the latter back to First's shareholders, but this didn't happen after Moto struggled to finance the deal. Bolton West was later sold to Euro Garages anyway and regenerated as Rivington services.

By August 2011, First hadn't grown and hadn't invested much in its remaining property. Roadchef put them out of their misery by buying all they had left - one service area and one truckstop. The hotel at Magor briefly deflected from Travelodge to First Lodge - allowing the spirit of First to live on unofficially - before changing to Days Inn.

The formal name First Motorway Services is now legally owned by Roadchef. Although they don't use the name publicly, internal documents still frequently name the subsidiary, especially those relating to Magor, Sutton Scotney and Annandale Water.

Their motorway service areas had hotels (usually former Travelodges) integrated into the main building. These were initially branded First Lodge. They were bought by Friendly Hotels in 1997 to become Comfort Inns. They later switched back to the Travelodge brand.

The following services were owned by First: