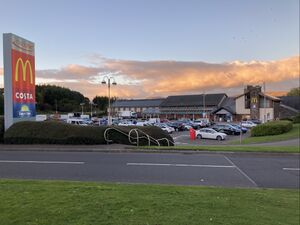 Sitting on the main route between Carlisle and Glasgow is this site built around a lake. Despite its deliberately rustic appearance, inside it offers the usual franchises.

Prices are paid using NexusPay or in the shop. The location code is 2281. 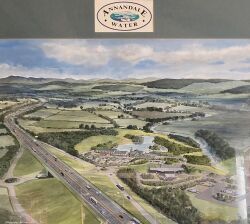 The location for a service area was obvious, as the nearby settlement of Johnstonebridge (which is served by this junction) was dependent on passing trade from the A74. This included two Little Chefs, which all closed when the new motorway opened in 1996 and the through traffic was lost. Blue Boar agreed to contribute towards the cost of the junction in this relatively rural area.

During spring 2018, the filling station was redeveloped by BP Express, introducing a M&S Simply Food store to the site. BP are now proposing to build two bp pulse chargers on the forecourt.

This is one of three services to be built by Blue Boar - the company that built Watford Gap. A few weeks after it opened, an official ceremony was held on 5 April 1995, attended by the Earl of Annandale.

Blue Boar tried to run each site independently and at Annandale they focused on local branding, using 'Annandale Water' and 'Annandale Lodge' around the site much more than their own name. The main restaurant was branded 'Waterside Restaurant'.

Their building style looks much older than other service areas from this era, partly because the best feature is the lake at the back, and partly because it was trying to create an atmosphere of tradition. Blue Boar said their interior was "Scandinavian style".

It does use the somewhat modern idea of having a hotel directly connected to the main building. The toilets, situated at the front, have separate entrances and exits and staggered doorways, to allow for very high flows.

"A service area with a difference"
Blue Boar's publicity

During construction a Mesolithic site was discovered and excavated. The lake for which Annandale is known was dug by the Glasgow University Archaeological Research Division, sponsored by Texaco and Blue Boar.

When Roadchef took over Blue Boar, other sites were demolished and replaced, but at Annandale they preserved many of its features. Inconsistent refurbishments have left several different styles of corporate branding visible together.

Even though the service area was never owned by First, since Roadchef took over that subsidiary, some internal documents relating to Annandale Water have been signed in First's name.

In 2014 as part of their standard refurbishment, Roadchef changed the restaurant to a McDonald's and relocated the Costa to the back, taking away some of the charm although undoubtedly forming a commercial success. The new restaurant was then relegated to the former Wimpy area.

Roadchef removed lots of Blue Boar's branding during the refurbishment, including the Annandale Water logo above the doorway and the seating area. The logo is still etched into the windows around the coffee terrace at the back.

Roadchef also pasted their logo on all of Blue Boar's exterior signage, including a sign which still advertises the former Waterside Restaurant.

During spring 2018, Roadchef redeveloped the main amenity building. The Costa café was refurbished and moved to allow the seating area to overlook the lake; the McDonald's restaurant was also refurbished and gained self-service order points and table service.

The former Hot Food Co restaurant was removed and replaced with Roadchef's newest own brand Fresh Food Café under a new concept called The Breakfast Kitchen, where the outlet is shared with Chozen Noodle and operates as each brand at the respective times of the day serving relevant products. The UK's most northerly and the first Scottish The Cornish Bakery internal store was also introduced here, and a Changing Places room was installed.