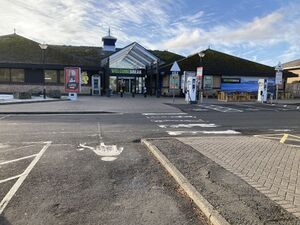 43 more photos in the gallery

A small service area located in the picturesque hills of Lanarkshire, in a corner of the motorway junction.

Prices can be paid in the shop with instructions in each car park. They are strictly enforced by ParkingEye. 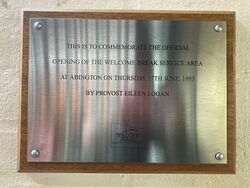 43 more photos in the gallery

The service area is positioned at the junction where the A74(M) motorway becomes the M74. It can therefore claim to be serving two motorways, even though most people will regard those two as only one route.

At the time Abington services opened, Welcome Break was owned by Forte, who also owned two Little Chefs in Abington village, at Valleyfield. Those Little Chefs were inevitably going to close with the new motorway opening, but they were effectively moved into the new building.

The new service area officially opened on 17 June 1993 and was opened by the head of South Lanarkshire Council, Eileen Logan.

The entrance opens out into a small foyer. Opposite to the entrance is the Starbucks café which has a door. To the left is the food court while to the right is Burger King, WHSmith and the toilet facilities.

It is a vastly scaled down version of other services built at the time, such as Warwick, although Abington hasn't been extended as much. It is easy to imagine it with facilities such as Red Hen and The Granary.

As with most Welcome Break service areas, David Fisher was commissioned to paint some artwork. At Abington the mural was called 'Upper Clydesdale Through The Ages', but it has since been removed.

The Starbucks was refurbished along with many others in early 2017, introducing a light wood theme throughout the store.

Welcome Break currently hold planning permission to build a KFC Drive Thru on the current caravan and motorhome parking area.