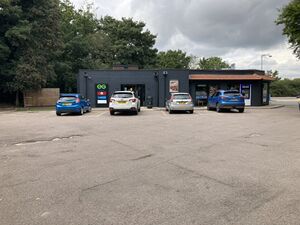 Also known as Babraham, this site is now located a short drive down the A1307. 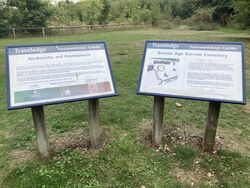 The information boards next to the hotel entrance, explaining the significance of the land adjacent.

For some reason, this service area has always been given undue prominence by some road atlases. It is often one of the only A-road services they mark.

This service area is roughly equidistant between London and Norwich, and it offers views of the A11. These were the two criteria given by fictional character Alan Partridge when looking for a good hotel. It is also only three miles from the village of Linton, and coincidentally the hotel he lived in during the series 'I'm Alan Partridge' was called 'Linton Travel Tavern'.

The site is also home to a Bronze Age Barrow Cemetery next to the Travelodge. An excavation of the site was undertaken in 1994 as part of plans for the service area here and remains of Bronze Age, Iron Age and Roman pottery were discovered. Information boards located outside the hotel entrance explain the significance of the site.

The main site started with a petrol station in the corner of the Four Went Ways Roundabout; the junction of the A11 and the A604. That is the roundabout which still exists today. In 1965, one of the first ever Little ChefHistory restaurants opened next to it, known as the Cambridge branch (later Abington).

The Comfort Café was positioned slightly further down the road from the main service area, and well-signed from the junction. It was established in 1922, and became a popular trucker's café, marketing itself as being "world-famous". More recently it had tended to focus on cars, with some HGVs choosing to park on the roundabout instead. The Comfort Café soldiered on until 2018 when it closed and was bought by Paragon Land and Estates.

The Little Chef became home to one of the county's first tourist information signs in April 1987 as part of a trial across the East of England.

Things continued without much change until 1993, when the Highways Agency started work on the upgraded A11, which would pass to the west. The service area would survive and Forte worked with Shell on plans for a significant expansion of the site, most likely turning it into one of their motorway services. The expansion caused concern from local residents but was liked by the authorities and approved.

At the same time the Trustees of the James Binney Will Trust put forward their own proposal, utilising land to the north of the existing services that would now be surrounded by roads. They described it as "The Island Site", going so far as to suggest its actual name would be 'Island services'. Two indicative plans showed a hotel at the north end of the site, linked by an entrance hall or canopy to a combined restaurant, coffee shop and travel shop. At the south end there would have been a drive thru fast-food restaurant, and a possible additional restaurant, as well as the petrol station. Parking would have been provided for cars only, on the basis that the Comfort Café was already popular with trucks.

The developer said that they had been in contact with several of the motorway operators, who were interested in the plan. Residents preferred it as it was further from them. However, the council preferred the Forte option as it was developing an existing site, rejecting the Island Site.

In the event Forte chose not to take advantage of their own planning permission, perhaps concerned about the Island Site being taken to appeal, or maybe worried about a number of planning applications which have been made for Stumps Cross. Being taken over in 1995 may have put a stop to things too. Instead, in 1998 their new owners built the Travelodge and added a Burger King.

A refurbishment in 2002 saw the restaurant become one of the Little Chef Choices, whereby Harry Ramsden's and Caffè Ritazza were added. These were later removed, and the Burger King closed too. Despite an attempt to sell the unit, the Burger King reopened in 2013.

Euro Garages lost the rights to use the Little Chef name in 2018, so the Little Chef was quickly replaced with EG Diner. The EG Diner closed in August 2018 and the whole building was refurbished, re-opening in January 2019 with new Greggs and Subway stores alongside the existing Burger King unit. Following the coronavirus lockdown in 2020, the Subway store was permanently closed.

Shell have recently installed three new Shell Recharge electric vehicle chargers here alongside the existing one. These were expected to go live during early 2022 however issues with power supplies have stalled the launch of the charge points.