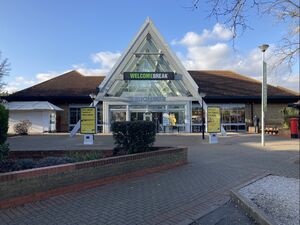 A single service area located at an extremely busy roundabout at the exit for Stansted Airport. 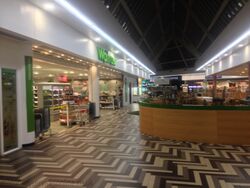 Inside the main aisle.

The service area is treated by many as an additional airport facility, as Birchanger Green offers two hours free parking compared to the steep parking charges within Stansted.

There is a new rival service area just a mile away on the A120, known as Stansted services, which is actually a group of facilities aimed at airport drop-off traffic which doesn't want to use the airport amenities. Consequently, Birchanger is signed to A120 traffic as if it were a tourist attraction. Traffic joining from Stansted Business Park gets signs for both services.

The large roundabout outside the service area has a long history of traffic issues. Some visitors have argued this is to do with the road layout allowing anybody who missed the car park to go round again, but the traffic lights at the exit seem a more likely culprit.

When you drive in, the petrol facilities are offered before you reach the amenity building. Normally it's the other way round. Here, the car park is the very last option you get, which has caused some panic and confusion.

Both the service area and Birchanger village are entirely within modern Essex, although the nearby post town of Bishop's Stortford is in Hertfordshire. As a result, Birchanger is usually listed as being a Hertfordshire service area, a listing which has shades of old-fashioned postcode envy.

A new sci-fi film which is in production will be named 'Birchanger Green', after the service area. The main character works at a fast food restaurant in a motorway service area. The director, who previously worked in a service station, was inspired by the way these places have a "bright, clinical, synthetic nature" that clashed with "the deep dark void of night outside". It will be filmed elsewhere.

A 77-bedroom "Days Hotel" was added alongside the existing 60-bedroom one as part of a £3m development. It was later re-branded to Ramada.

Tossed opened here in May 2014 - the first at a motorway service area. The same goes for Chopstix Noodle Bar, which opened in August 2016.

The WHSmith store is currently undergoing a refurbishment and is expected to reopen on Monday 6 February with new grab and go offerings.