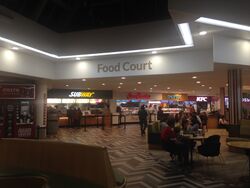 The M11 was originally set to have services at Chigwell and Newport. With low traffic levels and frequently changing plans for the surrounding motorway network, it was difficult to get developers interested in the M11. Birchanger Green was the end result.

The Prior Report of 1978 found that there had been numerous problems trying to build service areas on the M11, and advised that the Department for Transport's attention was turning towards a 28 acre site near Bishop's Stortford. It was known as Birchanger, and had been under investigation since 1974.

The site became the official plan in 1980. By offering at a busy junction right in the middle of the motorway, it was hoped that developers would show much more interest; meanwhile focusing on one site meant there would be fewer objections to overcome. The government's attitude was moving towards getting something open being better than having nothing.

Essex and Hertfordshire County Councils both supported building at Birchanger, believing it would be the least-bad option. The chosen site straddled both counties, although the border has since moved around it to place it firmly in Essex.

Despite Birchanger being chosen as the easy option, a long battle followed. Government policy was to compensate landowners for the value of land they were taking; in this case the site of Birchanger was being used as a field. However, the landowner had received an enquiry from Tesco about building a hypermarket there, so felt he should paid what Tesco would have paid. This problem had never emerged before because service areas were normally built in remote areas.

Meanwhile, in the north-east corner, BAA had their eyes on the land as part of their Stansted Airport expansion. The service area would have been compatible with the airport plans; in fact BAA were interested in running the service area themselves, but the Department for Transport at the time ruled that the roundabout could handle both an expanded airport and a service area. Many locals also objected to the development and argued that the roundabout couldn't take the traffic.

During planning, it was always called Birchanger. Adding the 'Green' suffix was a common stunt in the 1990s, to try to make service areas sound more homely. Early publicity suggested they had wanted to open it as "Stansted Green services", but after complaints from local parish councils, it was eventually opened as 'Birchanger Green'.

The service area eventually opened on 9 March 1995, with the official opening ceremony occurring later on 28 April 1995. The site was opened by Alan Haselhurst, MP for Uttlesford.

This is still the only service area on the M11.

The building is shaped as a triangle, with an airy corridor along one side and a small seating area taking up the rest of the space. The large glass front is typical of services of this age.

The food and shops appear in almost no order as units have moved around, but a large Waitrose (partly a former Red Hen) unit currently flanks the main corridor.

Although the interior of the services has been refurbished several times, the entrance doors are still in original Welcome Break blue.

Throughout the late '90s, the roundabout outside Birchanger Green was severely congested. Major widening work took place in 1999, and an even bigger project in 2002 saw a whole new junction built in the middle of it. What's left behind is still a complicated roundabout, particularly for customers who are heading south.

As traffic levels on the A120 rose, the junction became congested again. By 2010, Welcome Break had formally complained that the traffic lights were making it difficult for their visitors to leave. There was often a long queue running all the way around the site, which held up people trying to get in. Welcome Break offered to pay to have their exit moved to the smaller roundabout behind the service area, but the local authority wouldn't agree to it.

Given that this site has been beset by traffic problems almost since the day it opened, you'd wonder why the Department of Transport ever approved building a service area here in the first place. We know that at one stage they even said themselves that the airport and service area wouldn't work together.

It seems they were confused by the airport expansion being delayed and overcome by a sense of urgency to get something built. In addition, there was a common theme of small roundabouts being overused on motorways that opened during the cash-strapped 1980s.

While Essex County Council were making even more changes to the road layout in 2022, they left the door open to the idea that Welcome Break could one day pay to have an additional exit built onto Dunmow Road, via the hotel car park. This would likely be for staff use, replacing the muddy trackway that is currently used to access the bus stop. 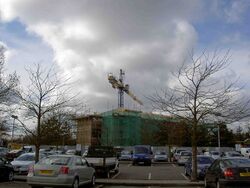 The new hotel under construction.

When Birchanger Green opened it had a Caffe Primo, which was the motorway network's first coffee bar. With palm trees and marble tables, it claimed to be an imitation of an Italian coffee bar. It also had a Little Chef, Julie's Express, KFC, Sbarro, La Baguette, and an unbranded fish and chip shop all held together next to The Granary under the name 'Granary Food Court'. For Welcome Break, this was a chance to showcase themselves as offering the best choice on the motorway at the time.

The Cafe Primo became Coffee Primo, and it had an attached lounge. The Little Chef became Red Hen. Red Hen and Game Zone were later merged to create one large Waitrose store. The food court idea has been maintained, although the restaurant has been taken out and new takeaway brands have been introduced.

During 2006 a Sainsbury's Local store was trialled at Birchanger. When its six month licence expired it was decided not to renew it. Before opening the store, Welcome Break had to negotiate with the Highways Agency who were concerned that the store would lead to local people using the services, making it a destination in its own right. Welcome Break argued that it was no different to Moto's connection with M&S.

The first hotel here was a small one at the back of the site, branded Travelodge, which opened in October 1995. This was intended to be typical budget accommodation, and at the time it was cheaper than any accommodation available at the airport, causing it to be promoted by several travel websites. This became Welcome Lodge, and is now Days Inn.

As Welcome Break invested more in their hotels, they became increasingly interested in building a slightly more upmarket one on the remaining grass and picnic area next to the main entrance. This eventually opened in 2008 under the brand Days Hotel. It was later re-branded to Ramada. The parking areas were expanded at the same time, utilising some of the land that had been left spare.