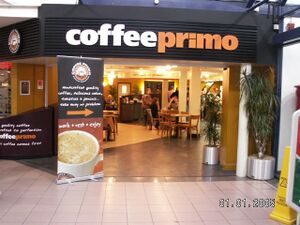 Café Primo was Welcome Break's own brand of coffee, introduced in 1995. From 2002, it was known as Coffee Primo.

The Primo name was introduced as part of a package of changes to Welcome Break's catering, which saw more of a focus on coffee and snacks, aimed at businesspeople. This meant the more bland Cafe Forte had to go, and instead came an Italian-style coffee bar theme, with palm trees and marble tables.

Café Primo was often paired alongside Sbarro, an American restaurant licenced to the UK by Forte, which furthered the Italian theme by serving pizza and pasta. The pairing was trialled in Birchanger Green, described as "a passable imitation of a continental cafe". They formed part of the restaurant, with The Granary providing most of the food.

Welcome Break were the only one of the main operators not to rely on a high street coffee name during the 2000s. Despite this, Coffee Primo won 'Best Beverage Experience', and it came 25th in 'Europe's Top 50 Coffee Shops'. 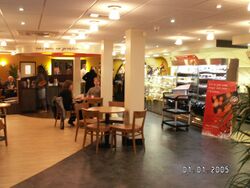 Inside the Coffee Primo at Warwick.

In 2000, Welcome Break registered the name Fastlane. One was planned to serve coffee at the entrance to Fleet, but it looks like it actually opened under the name Coffee Express.

With assistance and advice from Egon Ronay, in 2002 a new-look and newly-renamed Coffee Primo was trialled at Corley. It sold a range of hot drinks, paninis, pastries and ciabattas, and featured the first Primo Lounge, with sofas, workstations and laptop connections.

The new look received a boost in 2004 when Welcome Break closed all their Red Hen restaurants. The spare units, some of which were empty for a few years, were converted in to Primo Lounges. This saw most services gain a second Coffee Primo, with darker colours and more relaxed seating. The investment in this was considerable, compared with the simpler counters which are normally associated with service area coffee.

As a result, many of the old Coffee Primos next to the restaurant were named Coffee Primo Express. Both had the same range of products, with baked goods, snacks and a variety of drinks.

At a time when other operators were focusing on franchised brand names, Coffee Primo was incredibly well promoted. For a short while, Welcome Break painted their service areas orange to match Coffee Primo's colour scheme. Coffee Primo was the only 'own brand' to be promoted on the motorway signs.

They created a system called Primo Pay, which allowed customers to pre-pay for their drink.

In 2006, Starbucks was trialled alongside Coffee Primo at Corley. It didn't outsell it, but changes in consumer demand saw Welcome Break announce Starbucks would take over from Coffee Primo in 2010.

Welcome Break said the decision was made because they had decided they wanted to go "wholly into big brands", as brands like Starbucks had the advantage that new items are continually being added to the menu.

As a result, Coffee Primo was included in the drawings for Peartree, but it opened with a Starbucks. Despite all this, Coffee Primo remained at Welcome Break's facilities at the Eurotunnel UK Terminal until August 2013.