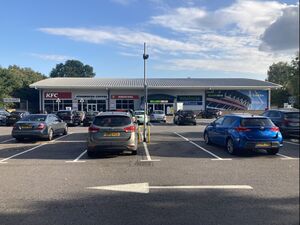 Cardiff Gate exists to serve the business park it is part of more than anything else. Since it was acquired by Welcome Break, it has become a full service area.

The ibis hotel car park is strictly for hotel guests and permit holders only and entry is barrier controlled. Hotel guests are required to provide their vehicle registration number to the hotel reception in order to gain free parking during their stay. These restrictions are strictly enforced by Civil Enforcement Ltd.

Welsh motorway service areas have always been put forward by the private sector, in theory allowing for more diversity. Cardiff Gate started out exactly like that, even if now it looks like any other service area.

Being part of a business park, it has always had a steady trade of commuters, but with a risk that this could head elsewhere. A Costa and Greggs are now set to open in an unrelated rival development on the opposite side of the road.

Brunswick's proposal was not connected with the neighbouring business park which opened around the same time, but once it was built, Fletcher Morgan's literature boasted that the adjacent business park and retail park would offer extra trade. As the building was being marketed independently of the main operators, a whole "Cardiff Gate motorway services" logo was drawn up.

It was a 10 acre development with 180 car parking spaces including 15 disabled spaces, 35 HGV spaces and 5 caravan spaces.

The forecourt opened in mid-2000, branded Elf. The main building opened in November 2000, with Granada taking up most of the units. By this stage, the Elf forecourt had already been re-branded Total.

The amenity building had a shell-shape, with a Little Chef on the front-left, followed by a Burger King, and then a spare unit. On the right was a Granada-branded shop, followed by a games arcade, and then the toilet block. The third part of the project saw an IBIS Hotel open to the north of the car park.

Brunswick went into receivership in 2002. The land was then purchased by the business park, who intended to lease out more units to allow the service area to cater for people working nearby as well as motorway users. One of these to open was a takeaway restaurant called Todiís, while Little Chef later added a Coffee Tempo! to their restaurant.

In July 2007 Welcome Break bought the lease on the main building for £650,000. The move was part of a series of gestures aimed at making the Welcome Break name about more than just long-distance motorway users; in this case they wanted to appeal to the nearby business park.

Welcome Break's brands soon filled the different units: the Little Chef became Eat In and Coffee Primo, the Burger King was largely unchanged, the arcade became WHSmith and the shop became Waitrose. The Eat In restaurant and Coffee Primo both became Starbucks in May 2010. This made it one of the first service areas in the country not to have a full restaurant. A service road next to the building was then utilised to create their first KFC drive thru.

When Total closed all their UK sites in 2012, the lease on the forecourt was sold to Rontec. They sold it to Shell, but unlike all the other Shells that are next door to a Welcome Break, this one was still operated directly by Shell and let on a 25 year lease. Welcome Break purchased the lease in late 2016, but they still don't manage the hotel.

In October 2020 it was announced that Cardiff Gate Business Park's owners Sir Robert McAlpine Enterprises had sold the service area land to Newcore Capital Management for £10,000,000. The site has an annual passing rent of £515,023.