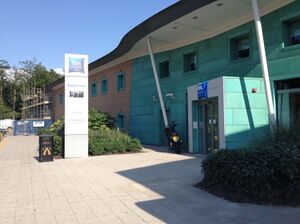 Ibis is Accor's mid-market hotel brand, with one branch on the motorway network. What's more common at the roadside is Ibis Budget (stylised as 'ibis budget'), the low-cost equivalent.

Ibis Budget was introduced to the trunk road network in October 2008, under its previous brand, Etap Hôtel. Three of these opened at new-build Extra service areas, with a fourth originally planned at Cobham but ruled out in favour of Days Inn.

Etap was rebranded as Ibis Budget throughout 2012, bringing the chain in line with Accor's other Ibis brands.

Ibis later purchased the lease for the former Travelodge at Lymm.

Ibis and Ibis Budget operate at several services. They are: [view on a map -  Download KMLrefine search]