Even as far as motorway services go, Welsh services seem to be much of a muchness. It is sadly very difficult to write something about Cardiff West.

Prices are paid using PayByPhone. The location code is 2431.

Parking in the forecourt is limited to 45 minutes with the maximum stay being strictly enforced. 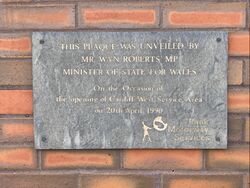 A recent upgrade to the westbound side of the junction saw two dedicated lanes provided for the service area - this is more than any other service area gets, despite Cardiff West being one of the quieter ones. Unfortunately, the exit from the roundabout only has one lane, making the additional lane pointless and slightly dangerous.

Welsh motorways aren't covered by England's Department for Transport, which means the planning system for service area was virtually a free-for-all. The effect of this appears to have been that competition around the Swansea area was much more intense, while closer to Cardiff there seemed to be less interest.

It's more likely that the local authorities here were more hostile to proposed services. In 1981 there were plans to build a service area in the south-east quadrant of the junction here, but this was dropped and the northern option, first proposed by A. Monk & Co. Dev. Ltd, soon prevailed.

Cardiff West was eventually built by Rank, as one of their last projects, and its building is very simple by their standards. The site was officially opened on 20 April 1990 by the Minister of State for Wales, Wyn Roberts, following a £25.9m investment. It was one of a number of new developments from Rank, after a quiet period during the 1980s.

Rank gave Cardiff West its own logo with a drawing of a dragon above its name, and the strap-line, "smiles better at Cardiff West".

The site opened with an integrated Top Rank Motor Lodge, so its reception area was combined with the main entrance. In the opposite corner was the dining area, but this has now been broken up into different units. There was also a Yorkie's Transport Diner by the HGV entrance, which is now boarded up.

The amenity building is built on a slight slope, with parking areas at each end. Disabled access is provided through a dedicated doorway and totally separate parking area.

Greggs opened here on 7 March 2013. At the time of opening, this Greggs outlet was unusual compared to others as it is accessed from within the main restaurant area. Even so, it sells takeaway food and for tax reasons that food can't be consumed in the seating area.

The former restaurant servery has been partitioned off, with catering now provided by Greggs and Costa.

The service area was built as a partnership between Top Rank and Esso, so the two buildings have always been operated separately.

Esso redeveloped the forecourt in 2008, with the new forecourt becoming home to one of their On the Run cafés and offering Costa Coffee.

In 2006, Cardiff West was rated as 3 out of 5 by Holiday Which? and they received a four star loo award.

The services were said to be well signed and have good facilities, but they were let down by the prices and variety of food on offer. The baby changing room was described as "a potential health hazard".

Cardiff West was also inspected by The AA on 4 and 5 April 2004. These are their results:

In this report, the services were noted for their indoor facilities and cleanliness, but the variety and quality of food was said to be a real let-down.