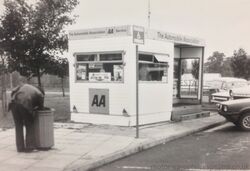 A much older AA motorway kiosk.

Motorists' group The AA have performed three surveys of European service stations, which included visiting a small number of UK ones. These were in 2000/2001, 2004 and 2007. One was also reported to have taken place in 1985.

In addition, the AA have commented on the general quality of service stations many times, usually with reference to the price of fuel. They also used to have kiosks within some services.

Although the AA have not themselves conducted any surveys recently, they now perform frequent quality assessments of hotels, restaurants and motorway service areas on behalf of VisitEngland. The outcomes are then publicised under VisitEngland's name.

In each survey, the UK's services usually fare poorly compared to their European equivalents, although their performance did improve each time. The surveys would consider road safety, facilities, food, shopping, pricing and hygiene, and would usually raise grave concerns about at least one of the services assessed.

Although an individual score was published for each category, the totals are listed below. A detailed breakdown, where available, is provided on each page.

As an older survey, in 1985 the AA's DRIVE magazine looked at a few smaller details. It criticised Frankley for selling coffee for 60p, whereas Aust sold coffee for 35p. Birch was similarly criticised for the price of its food, charging on average £6.28 for a meal. In contrast, Hartshead Moor had the cheapest meals, charging an average of £2.83.

They were generally satisfied with Gordano, Washington and Woodall northbound, despite a 20 minute wait for food at Gordano and chipped plates at Woodall. Meanwhile, Hilton Park was praised as having the quickest service, with only four and a half minutes between ordering and serving. Overall, they were generally disappointed with the quality of the food, but said that facilities were improving and that there was now a greater choice of places to eat.