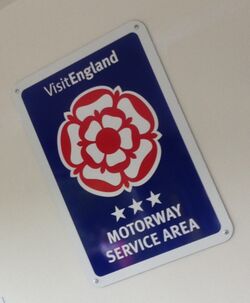 One of the ratings on display.

Tourist board VisitEngland were tasked with inspecting all of England's motorway services on an annual basis, between 2011 and 2015.

The idea of an independent rating system which has its results advertised on signs has been suggested many times, but it was Circular 01/2008. The Highways Agency asked VisitEngland to create the scheme in 2008, and it began in 2011. The responsibility moved to Transport Focus in 2017, whose remit had recently been expanded to include customer satisfaction on what had been called the Highways Agency network. Transport Focus use use percentages rather than stars, which slightly reduces the number of full marks awarded.

The assessments were part of VisitEngland's national quality assessments, a project which was contracted to the AA.

Motorway service areas paid to take part in the scheme, so not all took part. Sites with separate facilities were rated separately, although some scored the same on both sides.

The ratings, which can be between one and five stars but are usually no less than three, were displayed on plaques at the front of each service area. Sites were awarded based on their performance during an anonymous assessments that looked at their quality, key facilities and audit. Sites were visited two or three times over the previous 12 months.

The results of the three main surveys are shown here. Each star rating was given a worded title, where 1 is "below satisfactory" and 5 is "excellent".

Cherwell Valley and Tebay received 5 star awards in 2013. The new Cherwell Valley was praised for its good design, while in 2012 Tebay southbound had set a record by being the first service area to get the full five stars.

A number of categories and comments were made during the first award season, in 2011:

Gloucester was described as "fabulous" during the 2015 study.