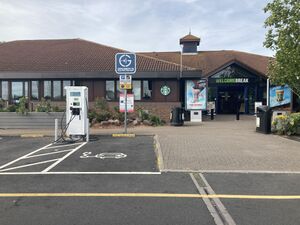 Welcome Break's half of the split services, for northbound traffic, with Roadchef operating the other half. 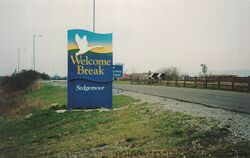 When the M5 opened in the 1970s, the Department for the Environment weren't sure how they were going to strike the balance between building enough service areas for people to be able to rest, and building too many service areas meaning they wouldn't be very profitable. This was especially problematic in Somerset, where the M5 was expected to be much busier in summer than in winter.

There was talk about Sedgemoor (originally known as 'East Brent') opening as a single service area with facilities all on one side. Even this was deemed to be too much, so it opened with only a car park and toilets. It was named Brent Knoll picnic area, and it was spaciously arranged so that it could one day be turned into a full service area. The overflow car park, which for a while was designated for caravans, appears to be the original car park.

The barren car park led to concerns from users about crime. Inspectors said the toilets were "full of vandalism". Trusthouse Forte (the owners of the next service area to the north) were invited to set up temporary catering facilities on the northbound side - they did this under their 'Motor Chef' name in August 1978.

Forte called their new development a "new concept in motorway catering", with a "continental-style building", accompanied by "attractive, chalet-style picnic facilities". It was very busy during peak times.

Life As A Service Area

After work started on a new southbound service area, in January 1986 Forte started looking at funding options for them to build a new northbound service area. Sedgemoor District Council supported them, which may have influenced the name change, as the council were delighted that their district's name would now be visible to passing motorists.

The full building opened opened on 18 May 1987, in a ceremony attended by the actress Faith Brown. At least some of the facilities were open by 17 April.

The main building opened with a large Granary restaurant area on the left, and a Julie's Pantry takeaway area on the right. The shop was straight ahead in the middle with gaming and toilet areas to the back.

Forte had worked with the Department of Transport as an early example of a service area developed by private initiative. There was a new Shell petrol station and a narrow HGV parking area. The main building was branded THF, but changed to Welcome Break in 1988.

Forte looked at building a Little Chef Lodge, but this opened as a Travelodge a few years later. This became Welcome Lodge in 1997, and is now Days Inn.

Welcome Break looked at adding La Baguette. Julie's became Granada's Burger King in 1996, and the shop became WHSmith in around 2008. The restaurant area, having gone through all of Welcome Break's incarnations of restaurant and coffee bar, now serves mostly snack-based food.

A Chopstix Noodle Bar was added in July 2017. The unit closed during the coronavirus pandemic and remained closed during the busy summer of 2021 owing to staffing issues. The unit then received a refurbishment in April 2022 becoming a hybrid unit offering The Good Breakfast in the mornings and Chopstix products from lunchtime. The unit partially reopened in early May 2022 as The Good Breakfast with the Chopstix offering opening on 1 July 2022, in time for the busy summer period.

The service area's heritage as a picnic area can still be seen in its unusually grassy appearance. In May 2018, planning permissions was granted for a KFC drive thru to be built on the grass at the back of the services however, due to the coronavirus pandemic, this has now been put on hold.