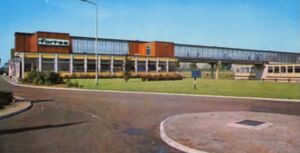 Fortes (later Trusthouse Forte) were a hospitality giant and the leaders of the roadside market before being bought out by Granada. They owned hundreds of restaurants and planned many services. Before motorways, they ran many hotels and cafés around the country. Their first business was a milk bar in 1935.

Owing to their heritage as a hotel and restaurant chain, they took the catering at their services very seriously. While they weren't flawless, at a time when their competitors were struggling to serve anything edible, Fortes were usually considered "the best of a bad bunch". 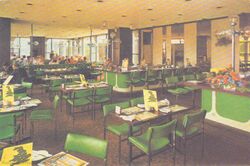 Inside one of Fortes' grill restaurants.

Keen to promote their name, Fortes wanted to get involved in the motorway game from the start. They proposed designs for both Watford Gap and Newport Pagnell, focussing on providing the highest service that would show their name in a good light.

At Watford Gap, they were marginally pipped to the post by a more competitive tender, but at Newport Pagnell they won the contract and created a design which went on to be used as a benchmark across the country. The government spoke highly of them, but then Fortes had been offering to pay them a lot of rent as rent was based on turnover and Fortes were aiming for the highest end of the market. It wasn't a conspiracy, but it did give Fortes a head start in the early tendering processes.

Fortes' first few services were actually operated by Motorway Services Ltd, a joint venture between Forte (92%) and Blue Star (8%). The latter were responsible for the fuel and recovery parts of the business, while Fortes took control of the catering and prestigious operation of the main site. The two paired up to ensure they had expertise in all areas of the industry, and to promote their two names.

Lord Forte had been very keen on the American principle of giving one operator a monopoly of the catering on an entire road. This doesn't really work with Britain's inflexible motorway network, and instead they made strong bids at every opportunity that arose. Monopoly regulations prevented Motorway Services Ltd from bidding for Lancaster, so Forte did it under their own name and claimed they were an entirely new operator.

After struggles to open Keele and Charnock Richard, directors of Motorway Services Ltd opted to sit back for a while and instead Forte bid to operate services entirely by themselves while Blue Star found new partners. 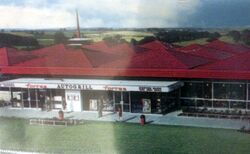 Fortes Autogrill was the name used for some large Fortes restaurants, built besides major roads, such as at Oxford and Barnsdale Bar. These were based on the success of their motorway sites, and were soon brought under regular Fortes motorway branding.

There was another Autogrill at Fortes' flagship Heathrow Airport hotel.

Early Fortes services included an American-styled restaurant called Grill & Griddle, and in many cases, seating available along the bridge to provide a good view of the road. They then moved towards a Scandinavian theme, making heavy use of visible wood in their building designs. While Rank and Granada were desperate to win the early contracts, Fortes' efforts were considered to be consistent and patient.

In 1969 Fortes launched Post House, a chain of hotels which would later sit between the upmarket Forte Exclusive Hotels and the budget Forte Travelodge. Although Post House was generally separate from service areas, it would become one of Fortes's most famous brands.

Fortes went on to build several more services, before merging with Trust House in 1970. Trust House had been running inns and lodges since 1919, and the combined firm became Trust House Forte - though on the motorways they were usually known as "Forte" or "THF".

The opening of Burtonwood in 1974 was regarded as a rare but significant business error from Forte. Soon afterwards they cancelled plans to build Chigwell, and they had told government representatives that they wouldn't be taking on any more contracts unless the rent arrangements were reconsidered. 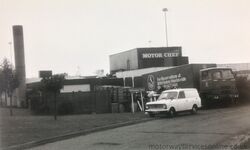 In 1976, they changed the name used by their services to Motor Chef. Some of the branding was very similar to Forte's Little Chef, as if the motorway sites were the bigger brother of the restaurants. Motor Chef banned football coaches, as hooligans were becoming a problem in service areas.

The Prior Report of 1978 would have made their motorway businesses more profitable, but Trusthouse Forte continued to hold back on new motorway service areas. In fact, they never built another service area under direct contract to the English authorities, although they did soon start developing service areas through other methods, such as Sarn Park in Wales or South Mimms on behalf of BP. These new ways of working meant they continued to hold the title as the UK's market leader for some time.

The Motor Chef name was largely removed in 1979, as a new corporate style guide wanted to call the whole business Trusthouse Forte, though on the motorways this was normally shortened to THF.

In the early 1980s Trusthouse Forte introduced shops selling sandwiches and a few groceries, branded Piknics. Its logo was an umbrella. They replaced unbranded cafeterias with The Granary, Little Chef, Julie's and The Carvery. At this point their services had a green colour scheme, with slogans such as "a choice of good eating" and "the finest food on the motorway".

Trusthouse Forte and their family of brands became geared towards families and businessmen, which was where the profit was to be found. Despite owning a few A-road service areas (branded Forte), the majority of their estate was restaurants permitting cars only. By 1987, relations with HGV drivers were at an all time low, and a boycott was almost arranged. HGV drivers were especially annoyed with Little Chef's refusal to serve them, and with the lack of facilities at South Mimms.

New services were opened in partnership with Shell, but THF also worked with Burmah. 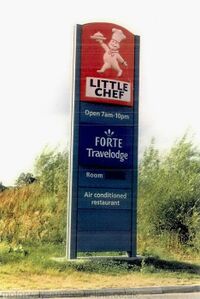 The Forte Travelodge crest, along with Little Chef.

Having owned Little Chef since 1960, in August 1986 Trusthouse Forte purchased Happy Eater and the four Welcome Break services as part of a package from Hanson Trust. With 40% of motorway service areas now owned by them, they had been expecting the Welcome Break acquisition to have them referred to the Monopolies and Mergers Commission, but instead it was Happy Eater that did this. Despite acknowledging that Forte were dominating the roadside restaurant market, the purchase was approved.

At the time Trusthouse Forte described Welcome Break as 'highly respected'. They had suggested that Welcome Break would continue as a separate brand under their management, but in 1988 they moved all of their own service areas to the Welcome Break name. The new Welcome Break logo had a small THF crest in the corner, which was generally removed in the mid-1990s, but the Forte crest could still be found in various places around each building. Each Welcome Break and Little Chef site would have a sign at the exit giving the distance to the next one.

This meant 1988 was the end for Forte-branded service areas, but they continued to run Welcome Break, the name used for all major service areas, as well as Little Chef, Happy Eater, and many other restaurant and hotel brands. The restaurants and hotels were expanding fast, and were a major part of the Forte operation. Egon Ronay rated the food highly.

By now Forte and its brands were the only operator to be very satisfied with the way the government regulated motorway service areas, and said they were keen to open more, but they had to wait for the Clacket Lane high court case to be completed. They introduced budget motels branded Forte Travelodge, which had a major influence on the hotel industry. On the advice of brand consultants Wolff Olins, the "Trusthouse" part of the name was formally dropped, and from now on they were just Forte.

In 1992, Trusthouse Forte purchased Sogerba from Accor. This deal included 60 sites ran by French service station operator Relais. Forte rebranded Relais to Côté France, using a theme and logo inspired by Welcome Break. Forte said that they wanted Côté France to be familiar to Welcome Break customers. Forte also entered a deal with Italian firm Agip to run a number of hotels and restaurants there, and worked with Repsol to introduce Little Chef to Spain.

The foray into continental Europe was an attempt to make the Forte business more resistant to turbulence in the British economy.

Granada's chairman claimed that he sensed a possibility of them being able to acquire their arch rival Forte as early as 1987. Charles Forte's retirement, which happened in 1993, would weaken the company. Meanwhile it was becoming increasingly clear that Forte's hotels and restaurants required heavy investment, and that this was making their finances difficult to manage. Granada was now growing at a faster rate, and they later described Forte's roadside service areas as being "tired" and "starved of money".

When Forte sold their contract caterer Gardner Merchant in 1994, Granada claimed that their offer had been ignored, and that this initiated their secret takeover operation, whereby Granada seniors were sent to visit Trusthouse Forte businesses to get a clear picture of what was involved.

Granada went public with their takeover plan in November 1995. Forte tried to keep their shareholders on side by selling other aspects of their business, tried to have their estate revaluated, and fought back against Granada's claims that they could increase Forte's profits by £100million.

Granada said that they would cut costs, take advantage of economies of scale, and focus on the combined firm's most popular brands, especially at the budget end of the spectrum. Forte said that if they survived the takeover their business would focus on upmarket hotels, selling all their less desirable brands. They had already been in discussions with Whitbread when they sensed that they were struggling, and had now agreed to sell them the UK arm of Travelodge and all their restaurants.

Granada won the takeover in January 1996, but Sir Rocco Forte tried one more time to buy back their upmarket hotels. This was resisted and Rocco Forte set up his own hotel brand. Granada was forced to sell Welcome Break, and renamed the remaining Trusthouse Forte businesses to just 'Forte'.

When Compass and Granada split up (Compass took Granada's hospitality services and Granada kept their media), Sir Rocco Forte was handed back the rights to the Forte brand name.

This section only looks at the logos applied to their motorway services division, rather than the whole Forte empire.

Initially their service areas used a smart, black-on-white colour scheme, although the Autogrill branches usually had "fortes" written in red. Blue colours began to emerge in the late 1960s.

After the merger in 1970, blue colours became predominant. The THF emblem was introduced, usually alongside the full "Trust Houses Forte" name, though not always. "Motor Chef" was normally written in red. After this was removed in 1979, "Trusthouse Forte" was used instead, but this was normally abbreviated to "THF". The Trusthouse Forte name was used on road signs.

In 1988 the Trusthouse Forte brand was scaled back in motorway service areas, but still to be seen. They now worked closely with Wolff Olins who wanted to strengthen the THF brand as the link between all their products. In June 1991 that name was changed to just "Forte", with a new crest, signifying the end of the "Trusthouse" name. Its use on the motorways became slightly more discreet.

The following services were owned and branded as Fortes, Trusthouse Forte or Motor Chef:

The following services were planned by Fortes but they were never built. It was noted that, at times, Fortes had a habit of coming second in everything they bid for: