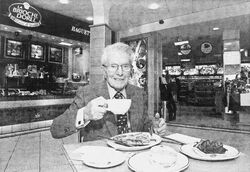 Egon Ronay (1915 - 2010) was a food critic whose guides to British restaurants became well-circulated in the 1950s, with many attributing his reviews to a vast improvement in the catering standards at the time.

By the 1970s Egon Ronay regularly featured motorway service stations in his reviews. Often creatively written, he rarely had a good word to say, and operators blamed much of their poor reputation (which stuck for the following 30 years) on what he had to say. The operators felt hard done by, as if they were being expected to provide a level of service that customers were never going to pay for.

His reviews formed part of the government's Prior Report into motorway service area regulation in 1978, which concluded that the quality of service area varied dramatically, but not all were as bad as their reputation would have you believe. His words regularly made for colourful headlines in the media.

In 2000, Egon Ronay worked with Welcome Break to create a new menu for Food Connection, after remarking that their all-breakfast tasted like they had been hanging around all day. His advice led to the creation of Coffee Primo. In doing so, he managed to raise customer satisfaction to an impressive 70%.

In 1961, Egon Ronay wrote about the new Newport Pagnell services. After his first visit, he wrote:

Stop with confidence. Sensibly devised dishes which you can eat at the counters in full armchair comfort served as if you sat at a traditional restaurant table. The other room was neat and appetising whenever I ate there and has tables too. Charges are very reasonable.

It wasn't the only time he was ever impressed. The 1986 Just A Bite guide to budget gourmet dining said the food at Leicester Forest East was "outstandingly good". He had been known to praise Tebay in 1972 and in 2000, and had also said good things about Harthill, Magor and London Gateway. Trusthouse Forte was the operator he tended to praise most: he called them "the stars", and in 1989 all of his top 13 service areas were Forte sites.

Egon was also a fan of service stations in theory. He was deeply critical of the M25 opening without any service areas, calling it "a scandal".

By the 1990s, Egon Ronay's criticisms were at their harshest, and service areas had almost become resistant to it.

He complained that he had to spit out a Yorkshire pudding at Sedgemoor because it was "pigsswill", and among the worst food he had encountered for 30 years. He described Gordano's steak and kidney pie as "having the consistency of axle grease".

As an example of his work, Egon Ronay's 1977 service station reviews are included below:

Egon Ronay's comments would often make newspaper headlines, which meant the offending operators would have to be asked to reply. Often, these operators wouldn't try to hide their disdain.

When Egon Ronay criticised Top Rank's "uninspiring cooking" in 1972, Top Rank said, "we don't attempt to provide inspired cooking with 129,000 meals to serve over a long weekend". They went on to say that a gourmet chef shouldn't be reviewing motorway catering.

More recently, in 1995 Granada said, "with or without him, we are striving to improve", suggesting they would take the feedback but wouldn't necessarily act on it.