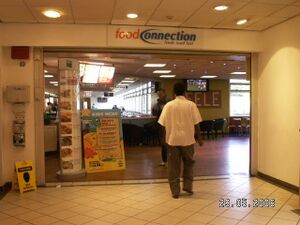 Food Connection was Welcome Break's own brand restaurant for the period 2001 to 2006.

Compared with The Granary that came before it and EAT IN that came after it, Food Connection was a much more bland and clinical affair, with not much theming of any kind. It was simply designed to cater for customers who didn't want Burger King or Coffee Primo. It described its offer as the "traditional fare", with hot and cold dishes and a salad bar.

It used the slogan "fresh food fast". Some of their restaurants were arranged as food courts, for instance the servery at Leicester Forest East stretched out over the main concourse. Most branches had a Coffee Primo-branded coffee stand included within them.

Food Connection was introduced to help Welcome Break move on from the legacy of the Forte era. Initially it received impressive feedback, but the name had to be retired when Welcome Break underwent a major rebranding, as it wanted all of its facilities to make a more memorable impact.

Food Connection used to be found at: