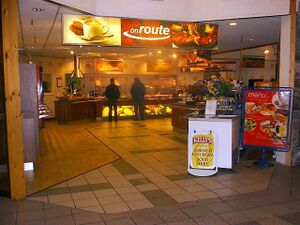 onRoute was the name of Roadchef's own brand restaurant, used from 2001 until 2007.

It was created by Lucid and Coverpoint and was first trialled at Winchester in March 2001. Launched under the spelling On Route, it originally had a much darker shade of orange. The aim was to create a more spacious environment, with more takeaway hot food and pre-packaged food in cabinets that its creators specifically compared to Pret A Manger.

This eventually replaced Foodfayre, which had too much queueing and was focused on being a full-service buffet. Before it was rolled out, the name was changed to match the new shop reStore, which was another Roadchef pun. onRoute appeared at every Roadchef, taking priority over any other brand if space was tight.

From 2004 their flagship site was at Norton Canes, where guests could watch their food be cooked in a "food theatre" (a kitchen), as well as table cloths and evening table service. Other sites were a more typical motorway offering.

All onRoutes became RestBite in 2007, which was a new theme for a very similar offering, with a buffet usually involving one hot food counter.

The On Route name wasn't entirely new: in 1983 Roadchef had registered the trademark En Route.

onRoute used to be found at: