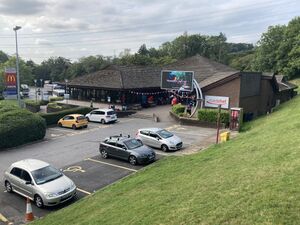 Nestled within the hills at the end of the M4 is one of the only 24 hour service areas in the region.

Prices are paid using NexusPay or in the shop. The location code is 2064. 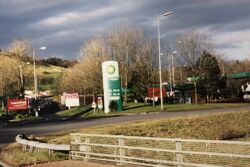 A Costa drive thru had been proposed here, to be built by the entry road, but has been put on hold due to general low site footfall.

The service area was officially opened on 17 June 1983, in a ceremony attended by the Minister of State for Wales, John Stradling Thomas. It was the subject of a BBC Radio Cymru documentary in 2013.

The name of this service area is very unusual, at least as far as motorway services go. Firstly it is not named after a settlement but a landmark, and secondly that landmark is named in Welsh - 'Pont' being Welsh for bridge.

Before the motorway was built, the A48 used to cross the River Gwili on a bridge which was positioned in the middle of where the roundabout now is. That bridge was known locally as Pont Abram, after the stonemason who built it. The new roundabout took the same name - modernised to become Pont Abraham, as did the service station that was added to it.

For a while Roadchef claimed that many of the services' staff are fluent Welsh speakers. This claim has since been dropped, but being at the far end of the M4, it is certainly the most Welsh of the motorway services; it's also Britain's most westerly motorway service area.

At the time Pont Abraham was built, all motorway services so far had been planned and supervised by the Ministry of Transport, based in London.

When the M4 was built through Wales, the Welsh Office took responsibility for all aspects of it. As the M4 has closely-spaced junctions and a lot of nearby towns, finding the right places to build service stations would have been a long and difficult task for the relatively small Welsh Office. As a result, private developers were asked to do all the legwork themselves.

Private developers liked the idea of being able to choose exactly where their service station would be. BP were the first to truly take advantage of it, and went straight for one of the most lucrative spots: the only roundabout with no flyover, so everybody had to use it. They must have been very keen to get this spot, because Pont Abraham opened 11 years before the M4 at Swansea was finished. BP worked with Roadchef on the project.

The down-side of this system was that the Welsh Office couldn't guarantee anyone that a rival service area wouldn't be built next door, and about 10 years later Swansea West opened just down the road.

Incidentally, in 1992 this planning policy was adopted in England.

Although the site opened without a hotel, in 1993 plans for a 39-bed hotel were approved. These plans were renewed in 2005, but the hotel was never built.

The building as it looked for many years, nestled in the hillside.

Pont Abraham uses a brick-courtyard design set into the hillside. That hillside isn't always apparent, but it is so steep the filling station is nearly covered by it.

The building itself is typical of Roadchef's from that era, but slightly more considerate of the local environment: it's possible that this is because Roadchef deliberately chose the location. The restaurant had seating for 175 people, and 35 jobs were created.

The Welsh Food Initiative was hosted here in 1989.

There used to be a hill figure of a teapot and teacup on the hillside, constructed in 1992 to enhance the services's entry into the National Tea Council "Motorway's Best Cup of Tea" competition, which was removed in the mid-2000s.

Owing to its low footfall, Pont Abraham escaped many refurbishments, and until 2015 it still had green The Orchards (the '80s Roadchef restaurant) furniture and a sheet of brown-tinted windows separating the restaurant from the main building. This restaurant ended up being re-branded as Costa and a Restbite counter. The Costa café was refurbished during September 2015, and the Restbite closed and reopened as a McDonald's the following November. This was Pont Abraham's first fast food restaurant.

The Roadchef shop later became the WHSmith, with the Welsh craft shop and tourist information centre becoming Fone Bitz and a Family Fun Hub respectively. Plans to replace them with two fast food outlets in 2000 didn't go ahead, and the Fone Bitz store has since closed.

The forecourt changed from BP to Texaco in around 2005. It was sold to Euro Garages in early 2017, and they changed it to Esso, although the approach signs weren't updated for some time.