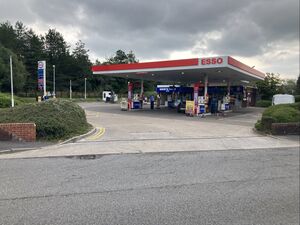 An unusual set-up: the services are signed from the A48 eastbound but not westbound, despite being positioned to the south of the road. It fights off competition from the McDonald's opposite. 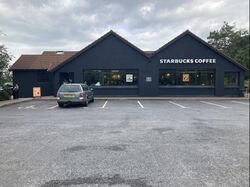 The service area was built in 1989, along with the lengthy upgrade to the A48. At the time it had a dedicated exit off the roundabout which only served the Elf forecourt, Little Chef restaurant and a Travelodge hotel (sometimes advertised as Little Chef Lodge), but it was clearly designed to attract more development. A small tourist information centre was built by the exit.

The end of the millennium brought major changes to Cross Hands with the Little Chef gaining a Burger King franchise in 1999, which was intended to become a drive thru. The tourist information centre closed that year, later being demolished, and the forecourt changed to Total.

The Burger King later closed and was left empty before the Little Chef was the victim to a cull of unprofitable branches in January 2012 and also closed. The building was later taken over by Euro Garages to become the Starbucks.

Following the nationwide shutdown of Total in 2012, the forecourt was acquired by Rontec who rebranded the site to Esso and introduced their Shop'N Drive store.

The site continues to face growing competition around the Cross Hands Roundabout, with Burger King, Greggs, KFC and McDonald's all located off other exits here. More recently, an ALDI superstore and a Swarco E.Connect electric vehicle charging hub were built directly opposite the service area. The Starbucks building remains the only dining option that is part of an official service area.