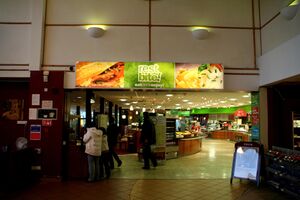 This page is about the Roadchef restaurant. Another chain of restaurants called 'Restbite' also existed at One Stop service areas.

Restbite was the last of Roadchef's buffet-style restaurants, and marked a period of confusion about what Roadchef wanted to do with the concept.

In general, it seemed that Roadchef wanted to use a single food order point, rather than the traditional buffet that had served motorways for the last 35 years. This change required a major reconfiguration of each site, so until that could be done, the existing onRoute restaurants were given small refurbishments to become Restbite.

Initially Restbite used a distinctive green colour scheme, which later became black and white. While it did receive some refurbishment, this was on a small scale which usually left it with a smaller serving area. Major refurbishments would see Restbite removed and replaced either with Fresh Food Café, or with a larger McDonald's.

There were four Restbite restaurants still open in 2017. By 2020, only Bothwell, notorious for being left out of refurbishment schemes, still had a Restbite. This closed under the guise of the COVID-19 lockdown, and was left empty for some time.

Restbite used to be found at: