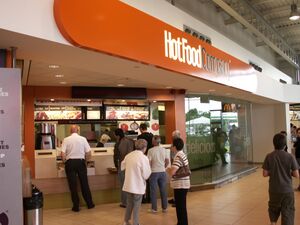 Hot Food Co. was a restaurant brand used by Roadchef.

It was introduced at Strensham South in 2008, as part of that site's new food court trial. Unlike its predecessors, Hot Food Co. used a single order point, with the rest of the restaurant out of sight to the customer. This, it was decided, was more space efficient, avoided the need for customers to wait around, and avoided the temptation to leave lukewarm food out on display as can often happen at a quiet buffet.

In 2008, Roadchef also registered the name Simply Put. It's thought this was just a proposal.

Initially Hot Food Company had its name written out in full, with bright orange colours. The Strensham trial was declared a success and from 2010 it was opened at more sites, this time using white and red colours. The sites at Clacket Lane and Norton Canes gained a stand from The Bread Kitchen in October 2012, but this was removed in late 2013. Lavazza was briefly trialled at Watford Gap southbound too.

In 2012, Roadchef created Fresh Food Café. This was a similar concept to Hot Food Co., but had different styling. It quickly replaced Hot Food Co. as Roadchef's restaurant of choice, and soon there was only one Hot Food Co. left, which was only open during peak times on one side of Sandbach. This last unit remained until the COVID-19 lockdown in 2020, and did not reopen afterwards.

Hot Food Co. was found at the following locations: