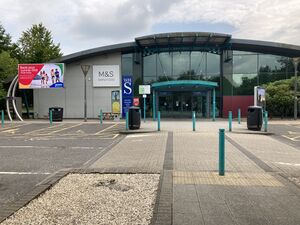 Signposted from the road? Yes (as Burger King/Costa/M&S)

A service area with a history of operators, with three different operators currently providing a small range of catering and shopping facilities.

Prices are paid using PayByPhone. The location code is 2477 (northbound) and 2478 (southbound). 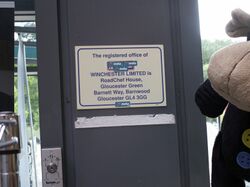 Winchester's location has been slated because not only is it quite a way from the city of Winchester, but it's located between where a substantial amount of traffic leaves for the A303 at J8 and a substantial amount of traffic joins from the A34 at J9. Several service areas had previously been considered around J7, but these were ruled out as the junctions here are close together and busy, so Winchester was seen as a better site. Many of the service areas planned to the north of here pre-dated this part of the M3 being opened.

One odd curiosity is the repeated advance signs for the service area that are on the motorway, for no apparent reason. The northbound signs all have a covered-up hotel symbol, which was most likely a mistake.

Jeff Stelling revealed that he did most of his research for that day's Sports Saturday at the northbound service area, as that was where he could get some peace. This small piece of trivia has gone on to become Hampshire folklore. 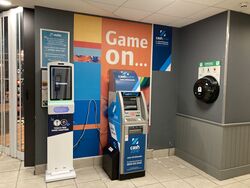 Roadchef's 'Game On' trademark can still be seen in the building.

The service area was built in a joint partnership between Extra and Roadchef by contractors P.J. Carey of Wembley. The original plan began in 1995 and was credited to Extra and Texaco; it was approved in 1999 and, after several delays, opened in 2001. Roadchef operated the main building while Swayfields ran the petrol stations.

The restaurant was branded On Route. This was a new brand developed by Lucid and Coverpoint, and was a trial of a new concept that was expected to be rolled out nationwide. It was slightly different to the onRoute that was eventually used; it had orange colours. There was a focus on takeaway hot snacks, and creating a more spacious environment.

Both sides included a Texaco filling station, operated by Swayfields under their Gold Star brand. The car park was broken up by trees planted in gravel, instead of the usual shrubbery, presumably because of a new awareness of rodent activity.

Unusually, the service area used to have one secret exit: in other words, authorised traffic could access the southbound site via Chillandham Lane, whereas northbound visitors had to use the M3. This access has now been closed off.

Space was left for a hotel to be built on the northbound side, but this was never used. The southbound hotel opened with the service area as a 40-bed Travel Inn.

On 19 November 2008 Roadchef sold their part to Moto for £9.5 million as they wanted to channel more money into their existing sites, and until now Moto didn't have a service station in this area. Keen spotters will identify much evidence of Roadchef corporate branding, especially in the car park.

The northbound restaurant was replaced with an M&S Simply Food store, with southbound later following.

Moto are seeking to build a Changing Places facility next to the northbound amenity building. The site will become an EV charging hub, with 12 new GRIDSERVE charging points by the coach bays, and 12 new Tesla Superchargers on the opposite side.