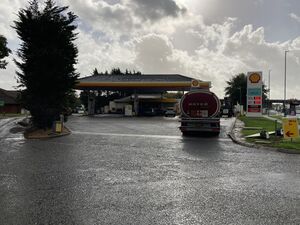 A27 Farlington Interchange, Portsmouth
(also accessible to traffic on the A2030)

A hotel and petrol station on Portsmouth's busy Eastern Road, which also acts as a service area for the A27.

Parking within the Holiday Inn Express car park is free for hotel guests only and you must provide your vehicle registration number to reception in order to receive free parking during your stay.

Additional longer-term parking is available for vehicles under 2m in height in the adjacent Farlington Playing Fields car park where parking is charged at 50p per hour between 10am and 4pm Monday to Friday only. Outside of these times, parking is free.

Fees for parking within Farlington Playing Fields car park can be paid using the pay machines located in the car park or via the RingGo mobile app using location code 1539. These fees are strictly enforced by Portsmouth City Council. 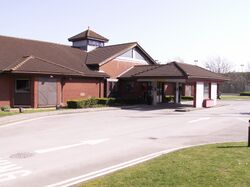 Plans for a hotel here were first put forward in 1979, to be built on the sports ground next to the new A27. A joint plan between Shell and Ladbroke was later made in 1985, who owned the Hilton National brand, and this was eventually built. The filling station was the first to open on the site, with the hotel opening shortly afterwards. The design included space for a 40-bed extension at the back which was never utilised.

Hilton National became Hilton in 2000. In 2015 it became a Holiday Inn, promoted under the name 'Portsmouth Park Hotel'. A few months later a £5 million refurbishment project began, and it became a Holiday Inn Express. The hotel was given a new entrance with the old driveway removed. The tennis courts later closed.