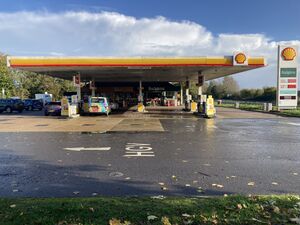 A27 between Portsmouth and Chichester

A petrol station on each side of the road forms one of the larger services on the South Coast Trunk Road. 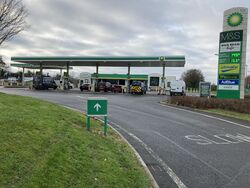 The service area is exactly 15 miles from the unbuilt Meon Valley services on the M27. Given that this section of A27 was planned to be part of the M27 right up until the last minute, it's likely that this was expected to be the site of a motorway service area, although in practice motorway service areas were rarely built as closely as had been planned.

On the old route of the A27 through Emsworth (now the A259), Forte had run the Nutbourne branch of Little ChefHistory since the early 1970s. This closed when the new road opened in the early 1990s, and Forte had been looking for a new site to replace it.

Plans for Emsworth services became formal in 1989, with the Total forecourt opening first. The site was originally intended to feature a Kelly's Kitchen, but this was changed to a Little Chef once Forte became involved in the service area. The Emsworth branch of Little ChefHistory and Travelodge were built next to the existing Total forecourt in 1994.

The Little Chef continued to trade until 31 July 2012 when it fell victim to R Capital's review of the brand. It was one of 67 sites identified as underperforming and was subsequently closed. Meanwhile, the forecourt was sold to Shell in the same year following their nationwide shutdown.

The former Little Chef restaurant was purchased by 23.5 Degrees who converted it into a Starbucks, which opened in May 2016.

Shell added Budgens branding and products alongside their own Select branding in early 2018.

There had been several plans for a westbound service area to accompany the eastbound as far back as 2005, but in early 2014, a large, westbound BP forecourt was finally built. The site opened as a BP Express site and included a M&S Simply Food store and Wild Bean Café.

BP Pulse electric vehicle charging points were added to the westbound side in 2020.