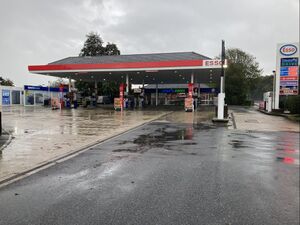 Two car dealerships forming separate service stations by the Stockbridge Roundabout. Each side has its own dedicated petrol station, but you can use one of the A27's many roundabouts to turn around and use either of them. 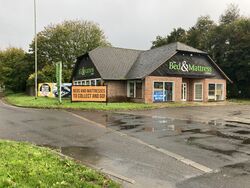 Planning permission for the two filling stations, one either side of the Stockbridge roundabout, were first granted in 1982. Both filling stations were built and opened in around 1988 by City Garages Ltd as Texaco sites with Star Market stores; the westbound one was named Stockbridge and the eastbound Kingsham. The eastbound one was built on the former Kingsham Farm and the two sites were often collectively known as 'City Garage'.

The service area used to be fully signed, advertising toilets, a petrol station (with the old-style pump symbol) and a restaurant. Those signs are now battered and mostly missing, suggesting the place doesn't want to be an official service area any more.

The westbound half-mile sign was removed in 2010. Shortly afterwards, the approach sign (which was unusually positioned on the roundabout itself) was mostly covered up, leaving just an updated pump symbol.

The eastbound half-mile sign had most its symbols covered up in 2012. It is still there, with its old-style pump symbol, but is usually covered by the bushes. The approach sign had its symbols covered up around the same time, leaving just the old pump symbol. In 2016 the sign was taken down and replaced with a non-standard 'Petrol Station' sign. There was an additional sign at the entrance, which was taken down around the time the symbols were covered up.