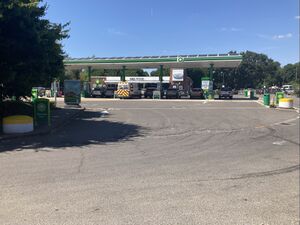 A3 at Petersfield
(also accessible to traffic on the A272)

A collection of facilities on a corner by the Petersfield Bypass.

The McDonald's shortly after opening.

The Petersfield Bypass opened in 1992. As it was being planned, it was agreed that a new service area would be needed between Petersfield and Portsmouth. Three possible sites were investigated: Clanfield, Buriton and Buckmore Farm.

The Buriton site was initially the favourite. An inquiry was held in 1987, in which the Department of Transport suggested they wouldn't acknowledge Buriton or Buckmore. The Buriton site was eventually rejected and Buckmore Farm received planning permission in 1988.

The plans were revised in 1993, and it eventually opened as 'Petersfield services' in April 2001, albeit with only a McDonald's. The BP garage followed shortly after with space left for an additional development. The pathway to the restaurant replaces the original gate from when it was a farm.

A 50-bed Travel Inn and the Great Oak branch of Brewers Fayre restaurant were built on the unused land in 2006. By 2008, the restaurant had rebranded to Table Table. It later changed to a Beefeater in 2018.

The name of the restaurant is taken from the large oak tree in the middle of the site. This tree is said to date back to the 17th Century and was protected by new fencing in 2021.

In February 2010, this service area formed the centre of an operation to help motorists stranded on the A3 by snow. Consequently it was used by the media in the following days.