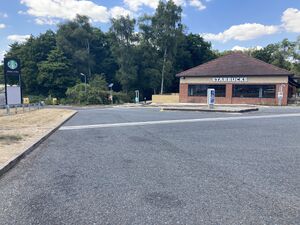 A3 between Hindhead and Petersfield

A pair of filling stations near the Hindhead Tunnel. The northbound side is much larger and includes a drive-thru coffee shop, with a drive-thru fast food restaurant joining soon. 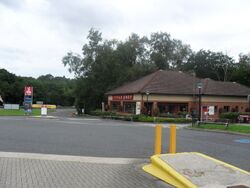 This section of the A3 opened in 1992, and it was always going to be a target for Forte because they operated a Happy Eater on the old road in Rake. This reported a significant drop in trade as soon as the new road opened, and Forte expressed their intention to close it; it was gone by 1994.

Back in 1989, Forte had registered a plan to build a pair of Little ChefsHistory as part of a full service station here at Liphook, developed under the title Griggs Green service station. The northbound restaurant opened in winter 1994, accompanied by a Travelodge hotel. There was a long battle to build a southbound side which was given up in 2001.

In 2010, an independent plan for a 40-bed hotel and restaurant on the southbound side was granted planning permission but was never built.

The Little Chef closed in July 2012 and the Travelodge closed in August 2013. The restaurant building was purchased by 23.5 Degrees who opened their first and Starbucks's first ever franchise store in the building on 6 February 2013. The hotel was acquired by Metro Inns.

Metro Inns encountered financial difficulties and closed on 24 July 2017. No buyer could be found for the hotel, and eventually plans were put forward to turn the hotel building into offices, while adding a drive thru to the existing coffee shop. These proposals were approved, but new plans were soon published that would see the hotel demolished and replaced with a drive thru McDonald's, with its own parking area.

The hotel was eventually demolished in June 2022, with the GeniePoint electric vehicle charger removed and previous parking area becoming part of the construction area. Meanwhile, the Starbucks store gained its drive-thru lane, reopening on 29 July 2022. The drive-thru lane is situated on the former staff parking area and a new car park was constructed along with it. The McDonald's Drive Thru opened in December 2022.