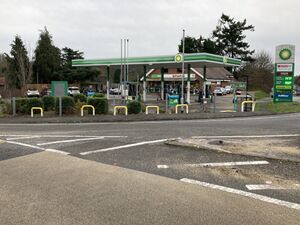 A3 southbound between Guildford and Hindhead

Signage has been reinstated for the small forecourt beside the A3 at the turn for Lower Eashing.

Soon after the Guildford and Godalming Bypass opened in 1934, a garage was built at the corner of the junction with Lower Eashing. It was a small building with a thatched roof. The place then grew and watched the A3 around it become busier and busier, becoming the service area that is here today.

The exit was improved, with Eashing Bridge being widened, after the Milford Bypass was built in the 1970s.

The site was branded Esso during the 2000s before rebranding to BP in the early 2010s.

The site was significantly damaged on 24 March 2011, as well as two other vehicles, after a 7.5 tonne truck smashed into the SPAR store. The site was deemed unsafe by the local authority and closed for several weeks after.

Signs calling Eashing an official service area were updated in the 2000s, and then all removed in 2015. They were reinstated in late 2021.