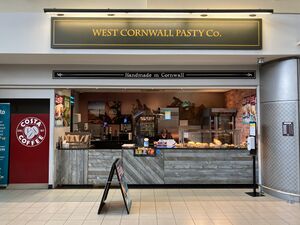 West Cornwall Pasty Co is a Cornish-themed offering which first opened its motorway doors at Reading on the M4 in early 2011. Until then their stores were mainly located on high streets. Most of these closed in 2013 due to unforeseen circumstances but they still maintain a high presence at railway stations.

As part of a major rebranding scheme, in 2016 West Cornwall Pasty Co began to roll out food warmers to petrol stations and stores throughout the country which dispense pasties and sausage rolls. These are being used in some MFG and Rontec stores. In railway stations they are now advertising barista-made coffee but this is yet to become an occurrence at motorway services.

West Cornwall Pasty Co are now starting to use the name 'West Cornwall Food Co', which offers a selection of sandwiches and cakes as well the usual offer of Cornish pasties. The first motorway site to get this branding was at Folkestone in April 2017.

In early 2021, Moto trialled West Cornwall Pasty Company cabinets within their forecourts at Exeter, Tiverton and Warminster, with more expected to be introduced across their network.

West Cornwall Pasty Co. operate at some Moto and Extra services. They are: [view on a map -  Download KMLrefine search]

West Cornwall Pasty Co. have cabinets situated in a few motorway forecourts. These are:

West Cornwall Pasty Co. have cabinets situated in some MFG and Rontec forecourts. These are: