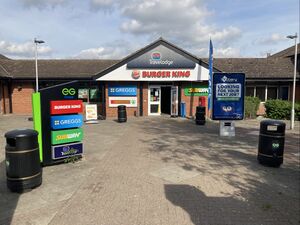 A new lease of life for an old building: EG Group purchased Warminster in 2017 and have since filled it with a number of franchises and brands.

First 2 hours free for all vehicles, after which HGVs, caravans and motorhomes must pay £14.

There is no overnight parking available for cars or meal voucher option for HGVs.

Prices are paid using PayByPhone, with fees strictly enforced by CP Plus on behalf of Moto. 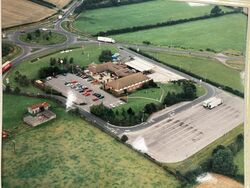 The land next to the Warminster Bypass was purchased by the family who owned Barton Stacey services, and after planning permission had been secured, it was sold to a developer.

Esso claimed that they had the idea of building a large service area on the Warminster Bypass. At the time there was a lot of competition between forecourt companies to be the first to open a site on the newly emerging major road network.

Esso favoured Granada as a catering partner, and Granada also wanted to expand fast. They therefore agreed to build a large restaurant and hotel next to the service area even though, with hindsight, the traffic levels didn't really warrant such a big restaurant. As a result, while other Granada sites would be packed with high street names, this one struggled to hold anything other than a Little ChefHistory. The adjacent Burger King attracted the majority of its custom.

This history changed in 2017, when EG Group took over.

When Granada acquired Little Chef and Travelodge in 1995, the restaurant and hotel were changed to those brands. They soon added a Burger King to the Little Chef. Although Warminster was mainly just a Little Chef, the site was still considered to be a key part of the Granada estate, and it received the full 1996 Granada rebranding. The adjacent roundabout came to be known as "Granada Roundabout", a name that is still occasionally used 20 years later.

Over the next decade, Granada's brands would be broken up. Moto inherited the grounds, as well as responsibility for the petrol station. Little Chef would own the rest of the building, including the Burger King franchise. Little Chef added a Coffee Tempo!, which became Little Chef Express in 2012.

Cash-strapped Little Chef were not known for carrying out much maintenance, and most of the building still had Granada corporate signage until 2016. At this point Little Chef's owners Kout invested considerably in this branch, refurbishing the dining area and introducing a slightly retro theme that was never used anywhere else. The new restaurant, which they called a "fresh concept", opened on 26 May 2016. They also changed the Little Chef Express to a Subway unit.

The Search For A New Use

In early 2017 Little Chef's buildings were all purchased by Euro Garages. They decided the restaurant should become a KFC drive thru, but they never secured planning permission for the new window. In January 2018 Euro Garages lost the rights to the Little Chef name, and changed it to the holding name EG Diner.

EG Diner formally closed on 12 August 2018, with Burger King and Subway closing a week later. Refurbishment works then took place with the plan being to move Subway to the former Little Chef/EG Diner area; to introduce a Greggs to the old Subway, and to extend the building and dining area.

In late October 2018, Burger King and Greggs opened. The planned seating area was scrapped and Subway eventually opened in December 2018, with the former entrance to Burger King closed off. The plan was then to introduce a Starbucks franchise, but in May 2019 it opened as Sainsbury's On the Go instead. In early 2021, the Sainsbury's On the Go store was rebranded to SPAR, before permanently closing in Autumn 2021 due to its low and very seasonal trade.