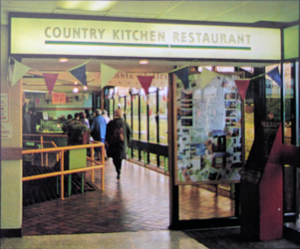 Granada's Country Kitchen Restaurant was the self-service restaurant used by Granada at almost all their services in the 1980s and early 1990s. It had tightly-packed tables with fixed seats attached and these seats were usually made out of fairly thin wood.

Lighting was diner-style with an American-style light-shade over most tables, offering a soft spotlight. The service counters were more brightly-lit.

The brand capitalised on the fact that operators were no longer expected to provide different restaurants for different class of customer, and they could now use one brand and apply it to everyone. The branding was deliberately chosen to be very antidote to motorway driving, which was Granada's ambition at the time.

Country Kitchen restaurants had a carving table and salad bar, serving full meals, snacks and a range of cooked to order dishes. It was based on the free flow principle, with freshly prepared hot and cold dishes and season specials. Unlike previous efforts, Granada now wanted to maximise staff interaction, and offered waitress assisted service with their steaks, grills and omelettes. The breakfast special cost £2.75 in 1986, while roast beef cost £4.50 and a pot of tea for one was 45p.

In the 1990s, the Country Kitchen strategy began to change. Firstly, some became AJ's Family Restaurants. Secondly, new service areas opened with a Granada Restaurant, which had a green colour scheme. In 1996 Granada went under a major rebranding to shake off its history, and all their new signs used the word "Restaurant" in the new font rather than Country Kitchen.

Shortly afterwards it was decided to replace the much-derided single restaurant with a number of well-known eateries. The name Fresh Express was created to fill any remaining gaps that the big brands couldn't cover. The last remaining Country Kitchen was in Stirling services, where much of the décor remained unchanged until 2008. There are still some very subtle Country Kitchen features to be found there.

In the 1970s, Granada's budget restaurant was called Granada Chef.

Granada Country Kitchen could be found at: