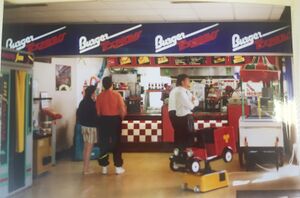 Only one photo tagged with Burger Express at services. If you have one, why not upload it?

The Prior Report of 1978 encouraged operators to experiment with new ideas. One of the first signs of this was Granada creating Burger Express.

At the time, American fast food restaurants were rarely found in Britain outside of cities, and the franchising of major food names was not common or popular. As a result, it was natural that Granada would try to create their own takeaway food offer rather than using a popular one.

By 1986 there were 12 branches of Burger Express across 9 service areas, and by the 1990s there were 20 branches. The brand was also expanded to Granada's GX Superbowl bowling alleys.

In 1993 Pavilion entered a franchising deal with Burger King to use that name in their service areas, and Granada very soon did the same.

At this point, all of the Burger Expresses became Burger Kings, and reported an 80% increase in sales afterwards. Granada would go on to invest heavily in Burger King.

Burger Express was one of the first takeaway food brands on the motorway, although dedicated seating areas (separate from the main restaurant) were made available where possible.

Burger Express was known to have been found at the following Granada service areas: