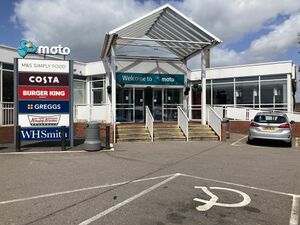 Neatly playing down its associations with one of the country's busiest motorways by overlooking the rolling hills of Worcestershire are two of the oldest buildings on the network. It won't win any awards for architecture, but it has a job and it does it.

Prices are paid using PayByPhone. The location code is 2438 (northbound) and 2439 (southbound). 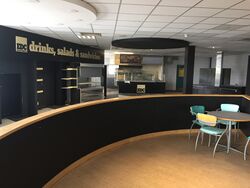 The former southbound EDC restaurant, this area is now hidden by a fake corridor to the toilets.

It seems there will never be an end to the jokes about Frankley's name, especially as it's close to Rubery.

As of 2014, the nationwide downscaling of restaurants and retail shops had left the centre of the northbound services and the upper level of the southbound services largely boarded up, with Greggs and Burger King making up the majority of the trade. This is an interesting contrast with many nearby services, which had grown in recent years.

On the northbound side, this was put right in March 2017 with a new M&S Simply Food store opening in the centre of the building.

There were plans for a southbound Greggs here for several years before the forecourt gained one on 9 March 2017 and finally the main amenity building gained a Greggs kiosk outside on 12 January 2018.

In July 2019, the next service area to the south-east, Hopwood Park, committed to lowering the price of its fuel. In January 2020, permission was granted for two bespoke road signs on the motorway at Frankley, which would advertise the price of fuel. Moto revealed that Frankley would be one of their trial sites for competitive fuel pricing that July.