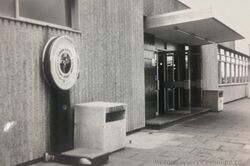 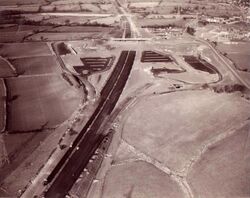 The services under construction.

During the planning process the service area was actually known as "Quinton Frankley". It was opened to bids in mid-1963. The contractor was Higgs and Hill.

The M5 was originally going to have service areas at Newland Common as well as Frankley, with Newland Common being the preferred option. The distance from Corley services (in an era before the M42 had been built) was measured to be too far, so Frankley was prioritised instead. 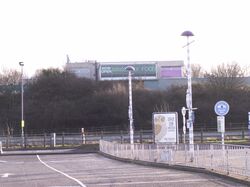 The northbound building designed to offer a view by towering over the south side.

The southbound service area has a very odd design, with a restaurant and toilets on the first floor. It's one of very few service areas to have a full second story, which backs out over the exit road. This appears to be an attempt to give an optimum view over the levels to the west (with all the store rooms facing the industrial east).

The northbound side keeps out the way with a much more typical low-level design. The northbound access road then drops below the height of that building, allowing a good view from the northbound restaurant.

The original design requirement was for a single-storey, "unobtrusive" building on each side. Granada's two-storey southbound side was later accepted as the best option, but great concern was raised over the tall gas-burning chimney on the northbound side, with planners eventually accepting it was the best place to put it. In their usual fashion, Granada frustrated the Ministry by making frequent changes to their proposals.

Frankley was the first service area to be built without a public footbridge, although £15,000 was later set aside to build one. Granada were keen to build it, and it was authorised in 1969, but Granada lost interest when the Ministry of Transport showed no interest in paying for it. In their early drawings, Granada had looked at running a tunnel between the two sides.

The lack of the footbridge had been a request from the Ministry of Transport. They knew the slope would be difficult to build on and wanted a different facility on each side of the motorway to account for this. They were willing to lease each side to a different operator but this did not happen.

Granada wanted a motel on each side of the road from opening, but at the time this was ruled out as being unacceptable.

Both sides of the service area originally included overflow space which has proven useful for expansion. What is now the southbound motel was zoned as a possible overflow lorry park. The northbound slip road on to the motorway was originally much longer, as it ran through more empty space.

Neither of the two amenity buildings were initially accessible without climbing steps: northbound had one step by the entrance while southbound had five steps by the entrance and 25 to get to the restaurant. This was changed in 1976. A "mother and baby" room was provided from opening.

"The Granada attitude, though well in line with what we realise of their attitude to life, is quite indefensible."
Highway Services division, 1966.

After being built, Granada were reluctant to open the service area as the M5 ended a few miles north of here, and the majority of traffic was being diverted off at the previous junction. Eventually the northbound side opened first in 1966, and attracted considerable local interest: residents would cut through the back roads to access the facilities. Despite this, in their April 1967 Granada reported that "the results have been disappointing", blaming this on lower than expected traffic levels.

Three-and-a-half years later Frankley still wasn't opening 24 hours a day, with Granada (who had earned a reputation for being difficult) still claiming trade was too low. The Ministry seemed to believe that the best thing about Frankley was that it was so far away from Granada's head office that their management couldn't interfere as much as they may have liked.

By 1971 the service area was one of few making a considerable (£50,000) annual profit. A 1975 review described the site of the services as "magnificent", but felt it was ruined by "stark and poor" buildings; Egon Ronay likened the atmosphere to that of a "sad holiday camp". By now internal alterations had already blocked the view to the west.

At the entrance were ash trays, pay phones, a posting box, stamp machine and weighing machine. A pin ball arcade led off the marble entrance hall. The menu was advertised prominently by the self-service restaurant which was spacious and well-lit. Commercial drivers had a separate seating area. Food on display included salads and cakes while milk, tea, coffee and cola were dispensed from a machine. Fuel was available from BP, Esso, National and Shell.

Granada initially used the large floor areas to provide a grill restaurant, but this closed and its equipment was moved to Heston. They instead moved their focus to "superior snack catering", aimed mainly at coach passengers.

The new, more basic, café had black and red bench seats, yellow tables and a spacious serving area tiled in red and white. 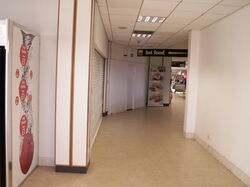 Closed units on the northbound side.

After the forecourts were rationalised, they became branded Mobil in the 1980s, until the company became BP in 1996. Part of the car park was being leased to a pallet business which traded until the 1990s.

A reopening of the main building was held on 10 April 1992 after a thorough refurbishment, though it's not entirely clear what this involved.

Granada were given permission to change Frankley's name to "Birmingham South" in June 1996. It's not believed that the new name was ever used on road signs, although it was used in a lot of their publicity. The proposal was withdrawn due to the cost and poor reaction.

The southbound restaurant, being upstairs and out of the way, has always struggled to attract custom. In 1999 Granada wanted to turn it into a business lounge, aiming to copy the lounges found at airports. This didn't happen but the downstairs coffee lounge, and the snacks sold in the shops, continued to cast a shadow over the restaurant.

Normally a restaurant like this would have been reduced in size, but given its awkward position, there was nothing to fill the space. Eventually, in 2014, the southbound restaurant was closed and its furnishings were slowly removed. For a long time it was just a sorry shell that people walked past on their way to the toilets, like walking through a hotel lobby that was never finished.

The service area was evacuated following a fire on the northbound side in November 2015. It was able to reopen later the same day.

On the northbound side, Granada's shops all closed, leaving a lot of empty units. In 2017, a refurbishment replaced the restaurant with a new Costa unit, making space for a large M&S by the entrance. This, along with the existing Greggs helped liven up what was becoming a tired site.

The 2022 Transport Focus survey calculated a 92% satisfaction score for the northbound services and 85% for the southbound services, placing them both in the lower quarter of the table, but still better than the previous year. The southbound side had an extremely high number of people saying they would tell others to avoid the service area - more than at any other.

In 2021, Which? Magazine ranked Frankley 45th out of the 68 service areas they visited.

In Spring 2018, Transport Focus calculated a 99% satisfaction score for the northbound services and 91% for the southbound services. By 2019 this had fallen to 90% and 75% respectively, placing it among England's worst four services.

In late 2006 Frankley starred on the BBC's 'The Money Programme', which described it as 'terrible'. At 2pm it had ran out of food.

In 2006 Frankley was also noted for having the best toilets at any English motorway service area.

In 2005 the service area won a five star loo award.

The service area was inspected by The AA on 4 and 5 April 2004. These are their results:

The self-service restaurant, range of goods in the shop and staff were all good, but the building was old, dirty, had few external facilities and had a long wait for a poor range of unappetising meals.

In 1977, Egon Ronay rated the services as "acceptable", describing it as "clean and attractive" but offering a poor selection of food.

In 1975, the service area was reviewed by the Birmingham Consumer, who described it as bright and well-lit. The majority of the facilities were very clean, except the toilets.

In 1972, Egon Ronay gave the service area a rating of "appalling". He didn't like the "blaring music" or the "slap-dash service".