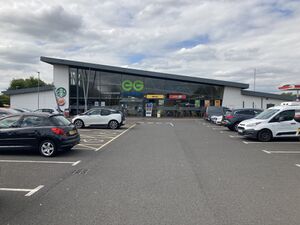 A40 between Newport and Monmouth

An old service area that has fully evolved, with new owners and a total rebuild.

First 2 hours free for all vehicles, after which cars must pay £8 for up to 24 hours and HGVs, coaches and commercial vehicles must pay £14.99, or £19.99 to include a meal voucher.

Prices are paid in the shop. The fees are strictly enforced by Parking Eye. 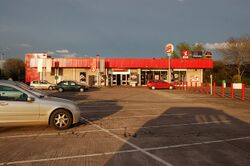 The service area was built by Lowthers in 1966. It was taken over by Granada Motorway Services, who were keen to expand away from motorways, in February 1986. It was one of their first attempts to taste the market away from the motorway network, and an easy way they could buy their way into the market. Welcome Break, another motorway operator, had just taken on a site up the road at Ross Spur.

Granada (and all the facilities here) generally promoted it as Monmouth, even if it was well known locally as Raglan service station, which was probably its official title upon opening.

There were originally a pair of lay-bys provided where the service area now is; the lay-bys weren't removed until 2003.

Upon opening, the forecourt was branded Fina, later Total. Following their takeover of the site, Granada created a Country Kitchen Restaurant, which they turned into an AJ's Family Restaurant and then into Little Chef. They also built a Granada Lodge, which became Travelodge.

Granada planned to build another stand-alone restaurant in the car park in 2000 however this proposal didn't seem to be thought out in detail. It is likely that the building could have held a combination of retail and takeaway food, probably under the Fresh Express name.

Granada became Compass, who treated the motorway services and Little Chef as separate divisions. Monmouth was classed as a Little Chef, and Little Chef became responsible for the whole service area. It was probably their most complicated branch.

As Little Chef were sold on, they increasingly struggled to invest in Monmouth. The buildings started to look dilapidated, especially after the Burger King closed which left bare spaces on the signage. The Coffee Tempo! here was later replaced with Little Chef Express in 2012, along with 10 other former Coffee Tempo! sites.

The Little Chefs and Total filling stations closed here on 24 September 2012, leaving only the Travelodge on the eastbound side. In summer 2013, that Travelodge closed, meaning that as of summer 2013, Monmouth services were left completely derelict.

Euro Garages later acquired both sides in September 2013 but left them derelict until April 2015 when they demolished the old buildings and replaced them with new combined forecourt sales buildings which doubled up as amenity buildings.

The eastbound services opened on 15 March 2016 and the south-westbound building opened on 20 May 2016 with both buildings housing Burger King, Starbucks, Subway and Greggs concessions along with a SPAR store in a similar style to Rivington. Euro Garages later refurbished the former Travelodge hotel, reopening the hotel in August 2017 under the 'Raglan Lodge' name.

Both sites also included 'Players Lounge' gaming areas however during early 2017, the westbound side lost its gambling licence and was temporarily closed. Both sides have since been re-branded as 'Jackpot Lounge'.

Following a number of fatigue-related incidents on the A40 and A449, Monmouth services is signed well in advance to what you would usually expect. On both the A449 northbound and A40 southbound, six miles of notice is given. Despite this additional advanced signage, both buildings are still very quiet considering their size and branded facilities. The north-eastbound side sees more trade as it has access onto Groesenon Road.

As a result of the lack of southbound custom and the impact of the coronavirus pandemic in 2020, the southbound Starbucks and Subway stores were permanently closed, with the former units being hoarded over.

Rollover and LEON Coffee concessions were added to the SPAR stores in early 2022, in an attempt to improve the 24-hour hot food offerings here.