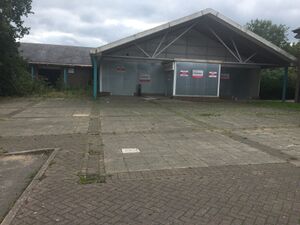 Signposted from the road? From A511 only

Most of the facilities at Markfield have closed, leaving only the Travelodge and a lot of abandoned buildings. The local authority appear to be happy to leave it as an official, signed service area.

All parking areas are currently closed, except for the Travelodge car park which offers free parking to hotel guests only. 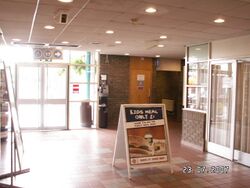 The service area was built by Granada who wanted to quickly increase their number of sites. They may have been hoping that them opening their Granada Lodge here would deter Welcome Break from expanding Leicester Forest East. As a result, they used the name Leicester to promote the site, rather than the less well-known 'Markfield'.

The main building had a simple cross-shape with a Country Kitchen Restaurant, shop and toilets: simple facilities that catered for passing traffic and, thanks to the adjacent Granada Lodge, overnight stays. The restaurant was open all night and encouraged locals to visit it for Sunday lunch. The petrol station next door was branded Mobil, and there were dedicated parking areas for cars, HGVs and coaches.

Granada turned the Granada Lodge into a Travelodge, and the Country Kitchen Restaurant into an AJ's, which later became Little ChefHistory, albeit still with green AJ's fittings. A Burger King was added to the Little Chef. The petrol station changed from Mobil to BP. Prominent 'Granada' branding was provided at the entrance.

In 1999, there was a plan to build another stand-alone restaurant in the car park. The proposal didn't seem to be thought out in detail, but could have held a combination of retail and takeaway food, probably under the Fresh Express name. In 2005 Moto stated that this was still a long-term ambition, although ultimately it didn't happen. 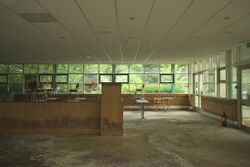 The derelict restaurant area in 2017.

When Granada became Moto, the company no longer owned Little Chef or Travelodge, although they continued to operate these branches as franchises. Even so, it became clear that there was no coherent strategy for the site, which was much quieter than most of Moto's estate. Moto didn't promote their own name much here, relying on Little Chef's branding instead.

The Little Chef and retail store both closed in 2008. The Little Chef became Costa, Moto's favourite brand at the time. This Costa soon closed, leaving a large empty space next to the Burger King unit. At this point the main entrance was moved from the side of the building to a new porch leading straight into the restaurant.

Moto sold their interest in the site. It was then leased by Euro Garages, who added a Coffee Nation machine to the main building. The petrol station was ultimately owned by BP, but operated it on a leasehold basis. They referred to it as Markfield services. 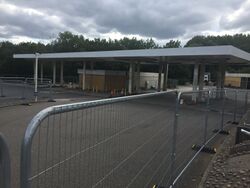 The petrol station after closure in 2020.

Euro Garages closed the main amenity building in 2014. This appeared to be a decision made at short notice, with posters and furniture still visible inside for a long time after. A small notice on the door explained that the building was closed.

The abandoned amenity building quickly became dilapidated, suffering from flooding which left the interior in a very poor condition. The surrounding grounds became even more unkempt, with the children's play area being lost amongst the foliage. There were several bare signs by the entrance, which had been stripped of all the logos they used to promote. By 2018, the main building and its surroundings had been fenced off.

In July 2020, EG Group closed the petrol station and the HGV and coach parking areas. All of the corporate branding has been removed from the now-empty forecourt. EG Group are instead investing in Browns Blue, a more reasonably-sized service area only half a mile to the west.

This leaves Travelodge as the only occupant of the service area, and their oversized car park is used for makeshift HGV parking, seeing as no actual HGV facilities are provided. The majority of the land is becoming overgrown, with plenty of dilapidated Granada memorabilia. The official "Services" signage remains on the A511, but somebody has been along and covered up the fuel symbols. The signs still promise the restaurant that closed many years ago.