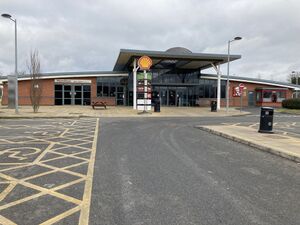 A46 at junction with the A6

One of the A46's larger service areas, quiet Leicester hasn't got into its stride yet.

First 2 hours free for all vehicles, after which HGVs must pay £1 per hour or £8 per 24 hours. No long-term parking is available for cars, caravans or motorhomes.

Prices can be paid using the pay machines located in the HGV parking area or by using PayByPhone. The location code is 806051.

Parking within the ibis budget car park is for hotel guests only and guests are required to provide their vehicle registration number to reception in order to receive free parking during their stay. These restrictions are strictly enforced by ParkingEye. 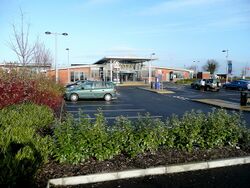 Leicester was a new style of service area. Its modern design allowed it to have a high capacity with a relatively small footprint, making it easier to build. The flexibility of its units were supposed to allow it to add a lot of choice to the fast A46: in practice, these have proven difficult to lease.

A service area was first planned at this junction in 1990, ready for the bypass to open in 1995, by Citygrove Roadside. This was refused. There were then plans to turn the land into housing, until Extra proposed the service area in 2005.

It opened on 24 June 2008. It has a twin sister - Derby & Burton at the A38/A50 interchange opened just over four weeks after Leicester and it almost identical to it. It was also sold at the same time.

In 2011, the surrounding area was developed with housing. This has open access to the service area providing hope that it may develop to also serve the local community.

It was built by Extra in a location that would allow them to expand with much less investment than their usual motorway sites. It opened with a Starbucks, KFC, Game Grid and LP4. When Extra's parent company Swayfields fell into administration, these services passed to their creditors Lloyds TSB, who subsequently sold this liability to Deutsche Postbank. They contracted their management to Quadrant Estates, who would be responsible for marketing the outlets.

When it was sold, the Extra logo on all the signs was changed to a round blue sign with the letter 'S', which was effectively a placeholder logo making a reference to 'Services'. Most of the branding is now Shell's.

The shop changed from Shell's own-branded Select to a Budgens store on 8 October 2017. This was later changed to a Little Waitrose store in late 2020.

The Starbucks was replaced by Hamiltons restaurant, which later closed and now lies empty. In 2012, the Game Grid was replaced by Quicksilver, which has also closed. A Banger Bros store opened in May 2019, replacing LP4, with their other branch being at the sister Derby site. This closed later in the year, leaving only the KFC.