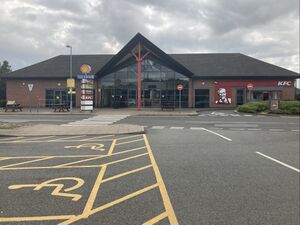 Derby and Burton services was built to provide new facilities where the A38 and A50 cross, but until 2017 it hadn't been a great commercial success.

Be advised that there are several car parking areas at this service area.

Main Parking Areas: First 2 hours free for all vehicles, after which all vehicles must pay £1 per hour or £15 per 24 hours.

Prices are paid using pay machines located in each car park or using PayByPhone. The location code is 806050.

Hotel and pub car parks: Parking spaces nearest the hotel and the pub are designated for customers only and non-customers receive an immediate and morally objectionable fine. Hotel guests are required to provide their vehicle registration number at the hotel reception in order to receive free parking during their stay.

Restrictions in the hotel car park are strictly enforced by ParkingEye. 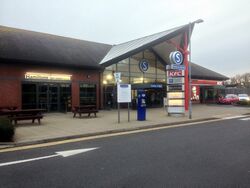 Derby & Burton has a sister service area, Leicester services. The two were opened at the same time, have a very similar layout, and have always been treated the same way.

The service area was first proposed as a series of developments, with separate buildings for two food units alongside an amenity building, pub, filling station, hotel and parking areas for all vehicles. It was called Willington services.

By 2005, Extra's parent company Swayfields had scaled the plans down with only an additional diner in a separate building alongside the rest of the facilities.

It opened on 29 July 2008. The amenity building had a KFC Drive Thru, Starbucks, LP4, a Game Grid and a shop branded Shell, who were also the fuel partner. An 81-bed Etap Hotel opened soon after, and space was left next to it for the diner.

The official name upon opening was Derby with Burton services - it seemed that Extra had learned from all the trouble at Blackburn with Darwen, and copied their diplomatic solution.

The road layout here is a little odd in that the site effectively has two entrances and two exits. The first entrance is only really provided to allow the pub to function independently, but a lot of HGVs were taking it by mistake and getting stuck in the car park. In 2011 the signage was beefed up by providing several 'no HGVs' signs, by making the main entry sign yellow, by moving the brand logos closer to the entry road and by placing a height barrier over the first entrance.

When Swayfields fell into administration, the site passed to their creditors Lloyds TSB, who subsequently sold this liability to Deutsche Postbank. It would now be managed on Deutsche Postbank's behalf by Quadrant Estates, who intended to create profit by selling the current outlets.

Following the change of ownership, the site was rebranded with a large blue 'S' being displayed on signage around the site as opposed to Extra's logo. The new branding included a subtle name change to Derby & Burton services, but only a few of the road signs have been updated.

The Starbucks unit closed and part of it became Hamiltons, which itself closed a few years later.

Accor Hotels rebranded the hotel to an Ibis Budget in 2012 following their withdrawal of the Etap Hotel brand. The hotel building was extended in 2018 which saw a restaurant and outdoor seating area added.

As of 2014, the additional units still hadn't materialised, but banners in the car park assured us they were coming. They eventually materialised in 2019, with a revised layout with five units ready to be leased out. These units then remained vacant until December 2021, when independently-owned Been Coffee opened on 13 December. This was later joined by a Subway store in Spring 2022, and local charity Treetops Hospice opened a charity shop here on 18 August 2022. Two units still remain vacant.

The filling station was one of the first three in the UK to gain Shell's new Shell Recharge electric vehicle charging points in late 2017. In 2018, after a small refurbishment, a Little Waitrose at Shell Select concession opened. Shell branding was then applied across the whole complex, replacing most of the 'S' logos.