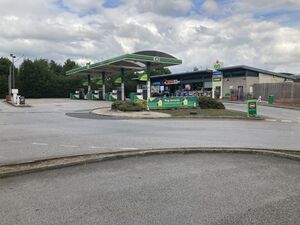 A50 at Derby Road Roundabout

A large service area at the start or end of the Uttoxeter bypass, and one of Euro Garages' early examples of what modern filling stations would look like.

EG Group-operated facilities: First 2 hours free for all vehicles, after which cars must pay £8 for up to 24 hours and HGVs, coaches and commercial vehicles must pay £14.99, or £19.99 to include a meal voucher. Prices are paid in the shop. These fees are strictly enforced by Parking Eye.

Table Table and Premier Inn: Customers and guests of Premier Inn and Table Table are entitled to free parking but must provide their registration number to reception or the bar in order to receive this. Chargeable parking is also available for non-guests or customers between 8am and 6pm 7 days a week and is charged at £1 per hour.

Prices can be paid via Horizon Spaces. The location code is 10999. These fees are strictly enforced by Horizon Parking. 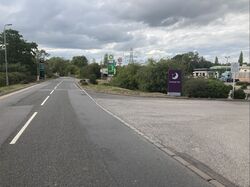 The approach to the services.

This service area is situated off the main access road to the Uttoxeter Sewage Treatment Plant, close to the Derby Road Roundabout.

The service area may need to close if the Derby Road Roundabout upgrade scheme is carried forward. This has been delayed until 2025 at the earliest.

The first plans for facilities along the access road came in 2000 from Whitbread for a hotel and restaurant. In 2001, a separate plan for a showroom, garden centre, pub-restaurant and hotel was approved with a Travel Inn hotel and a Brewers Fayre opening in 2002, known as 'The Racecourse' after the nearby Uttoxeter racecourse.

Uttoxeter Estates, who owned the neighbouring land, proposed plans for two restaurant units to sit alongside the hotel and restaurant. These proposals were refused planning permission in 2003.

The hotel and restaurant later became Premier Inn and Table Table respectively in 2008.

The official signposted service facilities didn't join the party until 2011, when a BP filling station with SPAR store and Greggs and Subway concessions, a Burger King Drive Thru restaurant and a Starbucks Drive Thru store were all built by Euro Garages. At this point, official signage was added to the A50, advertising the site.

Both the restaurant and hotel have received several extensions since opening, with the hotel gaining a detached second building housing 34 rooms in 2013. Premier Inn also currently hold planning permission to extend the second building to add a further 23 bedrooms to the hotel.

The SPAR store within the forecourt was rebranded to ASDA On the Move in January 2023.

One mile to the west of here is the aptly-named McDonald's Roundabout, which is the more urban of the two roundabouts on the Derby Bypass.

It hosts a number of facilities including another EG Group filling station and McDonald's Drive Thru on the eastbound side. There is also the former Uttoxeter Little ChefHistory and Travelodge hotel on the westbound side, with a Shell filling station positioned a little further along the A50 westbound.

None of these facilities are formally signposted and visitors of the filling station will see signs from EG Group encouraging them to visit the larger site here.