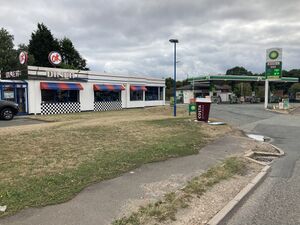 A pair of petrol stations south of Derby. Although they are connected directly to the A38, traffic can use a nearby bridge to move between the two sides.

Only the northbound petrol station is open after 11pm.

Short stay and overnight HGV parking is available on the northbound side only, charged at £10 per night. 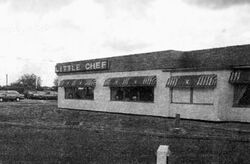 The Little Chef restaurant, pictured in 1995.

The site is often called 'Egginton services', referring to the village the services are located at.

Both filling stations appeared in the 1960s, shortly after the A38 was upgraded to become a dual carriageway. At the time they were known as Y-Pass Garage, a name that is still used locally. The southbound filling station is also home to a property called The Bungalow.

Little Chef opened their Eggington branch (often spelling it like that) next to the southbound filling station in the late 1970s.

A Travelodge was planned to be opened here in 1995, but was refused permission. The Little Chef closed in around 2005 and became the Derby branch of OK Diner.

In 2008 Derby and Burton opened one mile to the north, providing some competition.

Both filling stations were formerly operated by Brobot Group under the Jet brand and included KeyStore Express shops. By 2015, both sites had rebranded to BP.

HKS Retail took over the sites in 2016 as part of their acquisition of Brobot Group, who themselves were later acquired by Prax Group in late 2018, with both sites trading as part of their Harvest Energy Retail section of the business. Harvest Energy added a Greggs store to the northbound filling station in 2019, before rebranding the stores to SPAR in 2020.