Thorpe on the Hill services 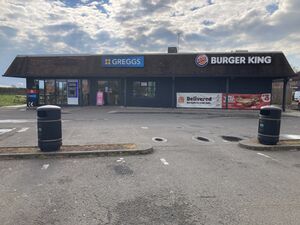 A46 at Hykenham Roundabout
(also accessible to traffic on the A1434)

One of Euro Garages's new restaurant areas, this one near Lincoln. 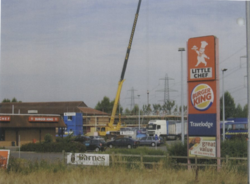 During the 1980s, the A46 Lincoln Relief Road was being developed which saw a new ring road constructed around Lincoln. The north-western section of the bypass opened in December 1985, and shortly after this, Norfolk House proposed a filling station, restaurant and tourist information centre to be built at the start of the bypass near Thorpe on the Hill. A revised plan without the tourist information centre was granted planning permission in 1987.

Kelly's Kitchen were taken over by Trusthouse Forte shortly afterwards, who changed the restaurant to become the 'Lincoln' branch of Little ChefHistory. This would compete directly with their own 'Fosse Way' branch, which was built in around 1982 and positioned in a less ideal location on Haddington Lane. This situation continued until the Fosse Way branch closed in 1999.

The Little Chef became EG Diner in January 2018, when Euro Garages' rights to use the brand expired. This lasted until July 2018 when both EG Diner and Burger King closed for a site refurbishment. The site reopened in October 2018 with a refurbished Burger King alongside a new Greggs store. A Sainsbury's On the go also joined the site in the summer of 2019 but later closed in 2020.

The filling station went on to become Total in the 2000s and in late 2012 was sold to Rontec who rebranded the site to Esso. Rontec also added their Shop'N Drive store to the site and converted the car wash into a stand-alone Subway store.

EG Group hold planning permission for the demolition of the existing restaurant building, allowing a new stand-alone Greggs store and Burger King Drive Thru restaurant to be built instead, retaining the existing car park.