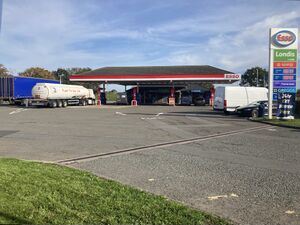 A46 north-eastbound between Newark and Lincoln

The vaguely-named 'Interchange services' is the more overlooked of the Winthorpe brothers: it's just an ordinary filling station for the A46 north-eastbound, but it's so close to the Winthorpe Interchange that it looks like motorists have a choice. 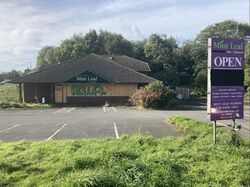 The former AJ's restaurant is now boarded up, ready for demolition.

The service area was planned in 1988 by Strait Properties Ltd as a petrol station and diner. It was likely planned in the hope that traffic levels here would increase following the opening of the Newark Bypass in 1990.

The diner would open as the 'Newark' branch of AJ's in August 1990. After they were taken over by Granada in 1998, it was converted into the 'Winthorpe' branch of Little Chef. Confusingly, a Little Chef already existed just across the road at the Winthorpe Interchange, resulting in the two branches competing for custom.

The restaurant closed in 2005 as part of the first major slimming down of the chain, which focused on smaller branches. It was later taken over by the Indian restaurant 'Mint Leaf', who permanently closed in late 2020.

The forecourt shop changed to Londis in 2016, and the forecourt rebranded to Esso in 2018. A full redevelopment was carried out in Spring 2021, reopening in July 2021 with a new Greggs store and a refurbished shop.

National Highways confirmed their preferred route for an upgraded A46 in February 2022. Drawings of the planned route clearly show that it will require Interchange services to be closed and demolished. They later suggested this was incorrect, and revised drawings released in October 2022 show that the new road has been realigned to squeeze between both of the existing facilities. Upgraded entry and exit slip roads will be provided from the A46 north-eastbound, to what National Highways confusingly call "Winthorpe services".

While this was going on, MFG had sought planning permission to build eight electric vehicle charging points in their forecourt in August 2022. National Highways had urged them to wait until more details of the improvement scheme are available.