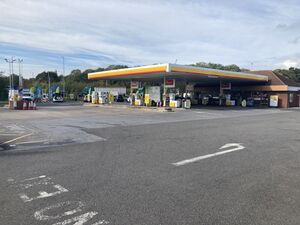 Signposted from the road? A17 and A46 southbound only

This is the existing facilities at Winthorpe Interchange. For the service area on the main A46, see Interchange.

The busy area where the A1, A46 and A17 all meet attracts a number of facilities, including this service area. 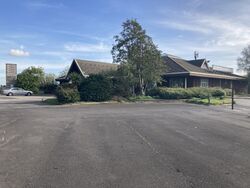 The service area was built by Top Rank in 1991, who called it Newark services and branded it with their new name One Stop. It was part of an experiment to try catching traffic with smaller facilities on A-roads and was treated mainly as a service area on the A46, even though it was clearly trying to capture traffic passing by on the A1. There was designated parking for all vehicle types, and inside was a restaurant, shop, game arcade and toilets.

Before that, Top Rank were bought by Pavilion in 1992, but the new owners were worried about their finances and looked to sell off the least profitable sites. Pavilion had looked at building a hotel here.

With that, the service area was sold to Trusthouse Forte, who decided to convert the building to a large Happy Eater, known to them as the 'Newark' branch. They fitted a large play area in the centre of the building.

The next year Forte were taken over by Granada who converted the restaurant to the Newark branch of Little ChefHistory, with an additional Burger King. With these brands already being widely available along the road, the service area had lost its uniqueness, and was starting to become more of a local facility.

In fact, the proliferation of Granada restaurants was so intense that between 1998 and 2005, it faced competition from another branch of Little Chef, right across the road. That branch was smaller but easier to access in some directions.

At Winthorpe, the restaurants had closed by 2006 and the building was purchased by The Friendly Farmer, who turned the building into their own restaurant and farm shop. While the Friendly Farmer was happy to serve long-distance traffic, it no longer felt like the main part of the service area, which now consisted mainly of the forecourt, which is why the site became known as 'Winthorpe'.

The filling station was sold by previous owners TCS to Shell in 2012 following Total's nationwide shutdown. During early 2018, it underwent refurbishment and it now features a Little Waitrose store.

The Friendly Farmer permanently closed in early 2020, having made enough of an impact for the nearby roundabout to become well known as 'Friendly Farmer Roundabout'.

Land in this area continues to be sold for development. As part of the Overton Park development on the former airfield, Lindum Group have built a Starbucks Drive Thru immediately behind the former Friendly Farmer building, but this is a separate facility accessed from a separate junction on the A17.

National Highways have plans to build a new flyover for the A46. If built, this would reduce the amount of traffic passing the service area, as the nearest entry and exit in both directions would be some distance away. It would still play an important role for the A17, but accessing it from there would still require a full lap of the roundabout.

Despite the impact of the new road proposals, the amenity building has become an auction house for a local auctioneering firm.