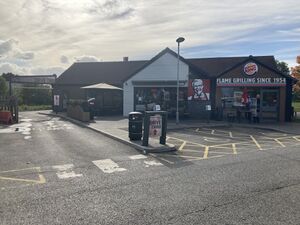 Positioned on the A15 just beside the Holdingham Roundabout is a standard A-road set-up. 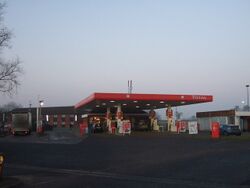 The former Total forecourt, pictured in 2012.

Plans for a service area here came forward around the same time the Sleaford bypass was built in the late 1980s.

Limes Developments Ltd were granted planning permission for a restaurant, hotel and filling station in March 1990. This was taken up by Trusthouse Forte who opened a new branch of Little ChefHistory in 1991. This was to replace the original Sleaford branch, which had been demolished to make way for the new road.

A Forte Travelodge and Fina filling station opened as part of the development, too.

The Little Chef gained a Burger King franchise in 1998, which at one stage looked likely to gain a drive thru lane. It became a Little Chef Choices site in 2002, which saw it briefly gain Caffè Ritazza and Harry Ramsden's menus.

By the early 2000s, the filling station had rebranded to Total. Following Total's nationwide shutdown, the forecourt was acquired by Rontec in early 2013 who rebranded it to Esso. They introduced their own brand Shop'N Drive to the site and added a Subway store.

EG Diner and its Burger King franchise both closed in May 2018. The building reopened in June 2018 with a refurbished Burger King and a new KFC Drive Thru.

Rontec rebranded the filling station from Esso to BP in late 2018.