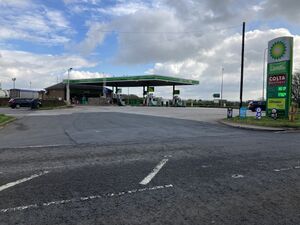 A flat junction in the plains of Lincolnshire has attracted some facilities. The signage is weak and inconsistent. 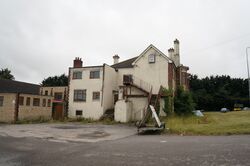 Caenby Corner is an important crossing on the old Ermin Street.

The petrol station at Caenby Corner was built as a garage in the 1950s. This was branded Total at one stage. Following Total's nationwide shutdown in 2012, the site was rebranded to BP and a Londis store was introduced.

On the opposite corner of the junction was the Moncks Arms Inn, later the Moncks Arms Hotel. The Caenby Corner Transport Café had set up in its car park, but this closed in 2020. The hotel itself closed in the 1980s and was only recently refurbished.

In 1986 the filling station was joined by a Little Chef restaurant. This operated until in 2008.

The site was purchased by Café Amore in late 2009, and they reopened it as a coffee shop. This closed in late 2015.

Local restaurant operator Meat Inc purchased the building and opened it as a restaurant in September 2016. This closed on 28 July 2019 as Meat Inc relocated to nearby Nettleham.

In 2020, 23.5 Degrees bought the former restaurant building and converted it into a Starbucks Drive Thru. The store opened on 18 December 2020. They added two InstaVolt electric vehicle charging points which went live in March 2021.